When I was researching about this trip, I saw underwater photos of Palumbanes and I instantly fell in love with it. So much so that I really made sure we would include this in our itinerary. If you love the underwater world, this place is the right one for you. The mermaid in me said I must not let this one pass. And it was worth it actually!

Palumbanes is composed of three islands: Parumpong (where Bitaog Beach is), Tignob Island, and Calabagio Island. Of the three, we went to the first two only.

Off to Palumbanes Islands
Shiela, our guide from the Provincial Tourism Office, welcomed us at the Virac airport with her infectious, charming smile. Not only that, her energy was unbelievable! One thing I have noticed in the airport is that most people (arriving or otherwise) are warm and friendly...everyone has a certain smile that lures you to do the same. The same is true to those who we've met along during our trip--the tour guides, the vendors, the drivers, hotel staff, everyone--not a single person was rude or unwelcoming. Maybe it is one of the secrets of the Happy Island...the warm vibe is truly  addicting. So for irate tourists, you don't belong to the Happy Island! =)

From the airport, we went straight to Caramoran on a private car, but for those who would like to commute, there are public vans in the city that can take you there. Just ask the driver to drop you off at the municipal hall and look for Aljohn, the Municipal Tourism Officer who would be glad to assist you on your Palumbanes trip.

It was a two-hour winding journey through zigzag roads that command spectacular views of the mountains. We didn't mind the dizzying curbs because our driver, Allan, has a well-curated playlist that made the trip seemed shorter than it actually was. He has everything from Side A to Ed Sheeran; as if he got all of Spotify's top playlists. Add to that, the early flight, which forced us to wake up at an unholy hour of 2:00 in the morning, made dozing off effortless. Should you decide to stay awake en route to Caramoran, no worries as the beautifu views of green-countoured mountains will definitely keep you company.

When I woke up we were already in front of the municipal hall, Aljohn gave us a short briefing of the things to explore in Palumbanes Islands. He had also arrange for a boat to bring us to Bitaog Beach and Tignob Island. Everything was moving perfectly as planned except for one thing: it was raining cats and dogs. You could just imagine how threatened I was knowing that if it continued to rain, we might not be able to cross the sea, or at the very least, won't be able to take good photos due to the gloomy light. Silently I just crossed my fingers, praying that the rain would stop before we board the boat. And like a miracle, it did!

We started the 30-minute ride to Bitaog Beach aboard a boat that could comfortably fit five to eight people. While its was raining hard that morning, we were so lucky that the sun shone full blast as we cruised the open sea, or else, the waves could have been unforgiving just like the week before when a team from a famous local travel show came here for a shoot. Our ride was smooth with a bonus of dolphin sightings upon our return back to the mainland.

Our first stop was Bitaog Beach. Aljohn told us that going there, there are two options: one is by docking at the community side and trekking our way to the beach, which he said is kinda adventurous and requires physical preparedness but the reward is a breathtaking view of the lighthouse and the cove; and second: dock directly at the beach. Knowing me, I chose the latter.

No one was on Bitaog beach when we arrived, as if the island was reserved for us. The shores even from meters afar looked like a glistening strip of powdered milk and on the foreground is calm, cerulean waters. On one side is a beautiful rock formation that houses a small inlet resembling a lagoon. Uphill are two native cottages that can be a shelter when it rains, while having picnic lunch, or even overnight Robinson Crusoe style. We brought packed lunch and ate with bare hands in one of the huts. It is better to bring your own food as there are no restaurants or eateries on the islands.


After lunch, we did not waste time and went for a dip. The island is not just picture perfect; underwater are huge coral reefs and a variety of marine life. It was like viewing from an aquarium... a huge aquarium at that! There was even an alley filled with plate sponges and table corals, resembling a garden of roses. To manage expectations, we did not see a lot of fish underwater. We saw some but not as varied and as many as let's say in Palawan or Moalboal. But corals abound, except for some parts that were obviously damaged by the typhoon Nina, which hit the province last year.

Our next destination was Tignob Island, which the locals refer to as the "Virgin Island." On the way to Tignob Island, we were already awestruck by the glass-like waters. At meters deep, we could still see the richness of the underwater. Our excitement intensified when we finally arrived on the island. It was a long heavenly strip of pure shores with no one but us! I could probably live here!

Tignob Island made the ticking of the clock stop; it made us forget all about the bustling life we live in the city; it made us appreciate nature's gifts; it made us realize how lucky we are to be living in the Philippines, that despite being a third world country, possesses such hidden gems other countries would die to have.

Both Bitaog Beach and Tignob Island have a strong potential to be developed as a diving destination. When we visited, there were no dive shops yet, so if you plan to dive or snorkel, you have to bring your own gears. Plans to offer diving here is already in the pipeline.

With sunkissed skin and drained underwater camera (there's too much to capture underwater so make sure to bring spare batteries and memory cards), we left Palumbanes Islands with a heavy heart and off we drove to our next destination: the Tuwad Tuwadan Lagoon and Cagnipa Rolling Hills.

The municipality of Pandan is just right next to Caramoran. On a private car, travel time is more or less 30 minutes. You can also hire a habal-habal (local motorcycle) that can take you to Cagnipa Rolling Hills and Tuwad Tuwadan Lagoon. In Pandan, we hopped on another boat, which brought us across to the entrance to (or rather the usual exit from) Tuwad Tuwadan Lagoon. It's kinda challenging to go down the boat and on to the rocks as the waves crashed strongly. It reminded me of my experience in Tangke Saltwater Lagoon in Gigantes Islands in northern Iloilo. But I had no choice--I couldn't let this one pass. I was told that this is one of those Batanes-like scenery in Catanduanes. Let's not compare; Batanes and Catanduanes both are beautiful in their own ways, and if you ask me which is better, it would be really hard to choose. No, I won't dare to choose between them because they are at par with each other.

It was already nearing sunset when we arrived in Tuwad Tuwadan Lagoon. While it was a pity we didn't see it while the sun is still up, we were fortunate to witness the dramatic sunset--it was like a painter from above was drawing streaks of purple and tangerine onto the skies and into the reflections on the sea. Breathtaking.


Tuwad Tuwadan Lagoon is not for the fainthearted. One would have to climb or descend from towering rocks, or, to make it more exciting, jump into the cold water. Again, knowing me, I did not jump, but our guide did it without any frou frou. It looked fun but I just didn't have the courage.


From Tuwad Tuwadan Lagoon, we went our way up to Cagnipa Rolling Hills, which is just at the top of those steep stairs. At first I really dismissed the idea that I would be climbing those rocks. I even asked our guides if it's possible to just go back to the boat. But they were determined--they said I shouldn't let this pass as you've never been to Catanduanes  if you've never done this. I'm glad I succumbed to their persistence. Bragging rights aside, the climb was easier than I thought, except that they literally had to drag me up so I could maintain my balance. At last, I stepped foot on Cagnipa Rolling Hills!

Sweeping views welcomed us in Cagnipa Rolling Hills--the skies meet the sea, the islands and coves like a painting that came to life. Beautiful, jaw-dropping views.


Palumbanes Islands, Tuwad Tuwadan Lagoon, and Cagnipa Rolling Hills can be explored on a day trip (just make sure to leave Virac early), although, if you have more time, I suggest you stay overnight. We went for a day trip and ended up arriving back in Virac at past 9:00 pm.

Should you wish to stay overnight, you may check out the following: 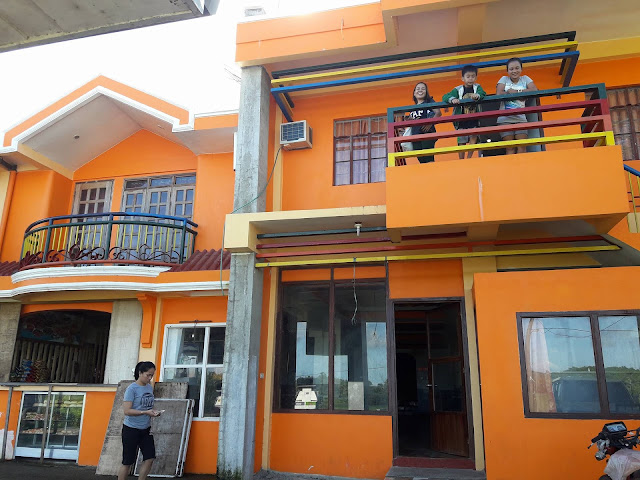 While Caramoran and Pandan are far from the capital town of Virac, they are definitely worth a visit. Be it a day trip or an overnight stay, you are sure to be delighted with the many sights you can explore in these towns. Caramoran and Pandan may not be as progressive (at least for now) as the other touristy towns in the country but both are very rich in natural beauty. Every angle, every frame here is Instagram-worthy. Every spot, postcard-perfect.

Up next: Spending our second day in Binurong Point and many more!

Meanwhile, have a look at this short video that gives a sneak peek of the Happy Island. The video can also be viewed on HD (720p or 1080p). Enjoy!

offers customized tours to Catanduanes and all over the Philippines
To learn more our packages,
you may email travel dates and number of persons
at thetriprepublic@gmail.com,
or through mobile at +63998.8644143.

You may also check out www.triprepublic.net