Aside from mystical Monte Cueva and the Maasin Zoo, Southern Leyte is also a famous snorkeling and diving destination as it is home to some of the country's richest and most colorful marine sanctuaries and diving spots. In the towns of Macrohon, Padre Burgos, Sogod, and Pintuyan, divers and snorkelers alike flock specially through the months of February to April to explore the scenic underwater the province has to offer.

On our second day in Southern Leyte, we journeyed through sun, sea, and sand in the towns of Macrohon, Padre Burgos, and Limasawa Island. Our first stop: Macrohon.

How to go to Macrohon:
By Air
From Manila, take a one-hour flight to Tacloban. Domestic airlines such as Airasia, Cebu Pacific, and Philippine Airlines fly daily to Tacloban City. From the airport, ride a jeepney or a tricycle to the downtown. If riding a tricycle, you may ask the driver to bring you directly to either Duptours or Van Van's terminal. These shuttle services both have regular trips to Maasin City, your jump-off point to the many destinations in the province. Travel time from Tacloban to Maasin is about four hours, passing through Dulag, Baybay, Inopacan, Hindang, and Hilongos, among others. Fare as of writing is Php 220. From Maasin terminal, take a multicab to Macrohon.

By Sea (from Manila)
There are buses that ply the Manila-Maasin route like Philtranco.These will pass along the provinces of Quezon, Camarines Norte, Camarines Sur, Albay, Legazpi and Sorsogon where it will board a barge from Matnog to Allen in Northern Samar. The journey continues on to Samar and Leyte, and off to Southern Leyte. It's a long, butt-numbing ride! Fare as of writing is Php 220. From Maasin terminal, take a multicab to Macrohon.

By Sea (from Cebu)
From Cebu, take a ferry to Ormoc City and from there board a van shuttle to Maasin City. Travel time from Ormoc to Maasin is around three hours. FFare as of writing is Php 220. From Maasin terminal, take a multicab to Macrohon.

What to do in Macrohon:
If you love the sea and the underwater, you will definitely fall head over heels with Macrohon as it is home to the award-winning Molopolo Bird and Fish Sanctuary. I saw this in an episode of the local television travel show, Biyahe Ni Drew, and I must admit I didn't realize that it was one of the best sanctuaries I would ever explore. Indeed, it deserves the award.

From the jump-off point, a ranger who is in charge of taking care of the sanctuary will give you a briefing about Molopolo Bird and Fish Sanctuary, as well as the many activities that you can enjoy while you are there. You can snorkel and dive, as well as do bird watching. Since we don't dive, we availed of the snorkeling package, which was priced at Php 150 per person. It already includes gears though should you have your own gears like us, the price will still be the same.

During high tide, snorkelers can use the boat to go faster to the sanctuary. This is already inclusive in the Php 150 fee. However, since it was low tide when we arrived there, so using the boat was impossible. The ranger suggested that we walk through the mangroves on one side of the island and from there we would swim our way to the sanctuary. It was quite far but we dared to do it, nonetheless. We geared up and off we walked to the mangrove area.

At the mangrove area is a fine white sandbar that has its own allure. It's a perfect venue to bask in the sun as there are no cottages there. That being said, make sure to have sun protection when you go to this part of the sanctuary.

We walked a few meters away from the sandbar, wading through rocks and seaweeds. When we reached a part of the water that was already above the knee, we put our fins and started swimming towards the white buoy marker. As if we were transported to a beautiful underwater kingdom, our eyes feasted on rich marine life--corals, fishes of different kinds, sea turtles, and a lot more. Though it still did not beat Moalboal and Pangalusian Island in El Nido as my favorite snorkeling sites, the Molopolo Bird and Fish Sanctuary truly deserves the awards it received. Below, you will find some of our underwater photos. 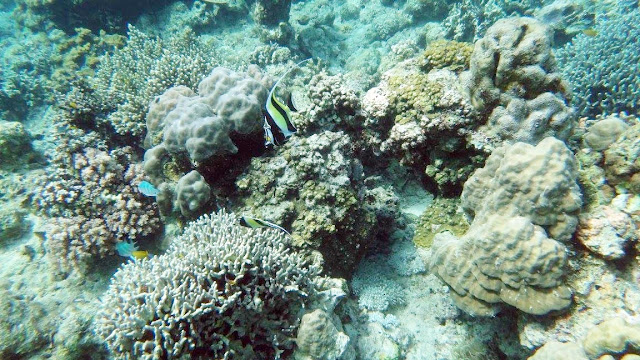 For those who are not into snorkeling, you may still enjoy fish feeding by the bamboo bridge. You just have to buy bread from the store within Molopolo Bird and Marine Sanctuary. If you also want to spend an entire day here, you may rent a cottage for Php 200 and bring your own food. There's no corkage fee.

Besides Molopolo Bird and Marine Sanctuary, you can also visit the Cambaro Caves in Macrohon. There are well-trained guides who will go with you in exploring these countless caves.

Where to stay in Macrohon:
There are a number of accommodations in Macrohon and the nearby Maasin City, Padre Burgos, and Sogod. Since we went straight from Padre Burgos to Limasawa Island, we did not have the chance to stay a night Macrohon. However, on our way back to the mainland, we docked at Kuting Reef so we were able to roam around the resort while waiting for the car that would pick us up.

Situated in a secluded cove Kuting Reef is a quiet resort that features a fine pebble beach within a three-hectare property fringed with old coconut trees. It has an infinity pool and a restaurant making it a complete relaxing escape from the bustling city. Room rates start at Php 2,700 per night.


This tour was made possible through the assistance of the Region 8 Tourism Office as well as the Provincial Tourism Office of Southern Leyte. For questions, you may reach them at dotreg8@yahoo.com and tourismsouthernleyte@gmail.com.

offers tours to Southern Leyte.
To learn more our packages,
you may email travel dates and number of persons
at thetriprepublic@gmail.com,
or through mobile at +63998.8644143.

You may also check out www.triprepublic.net.