It wasn't really part of the plan. Well, there was really no plan in the first place. Not until it was already the day before our flight to Davao City. We crammed to death to find at least a home for a night, so we finally decided to book a room at Island French Resort in Babak District, Samal Island through Agoda. From there, we thought we would lay out the plans for the succeeding three days.

Upon arrival in Davao City, we took a cab to the Sasa Wharf where the barges and boats going to Babak District are docked. Barges leave every 10-15 minutes. This wharf is different from the Sta. Ana Wharf where boats going to Pearl Farm Beach Resort and Talikud Island are.

The barge had just left when we arrived at the wharf, so we had to wait a quick 15 minutes. We didn't mind because the travel from the wharf to Babak District is just a fast 15- to 20-minute ride, and the wharf has seats anyway. When the barge came, trucks and cars began going inside one by one, and then passengers were called to board.
Before we knew it, we were already asked to disembark from the barge. It was that fast. I called the owner of the resort so she can fetch us from the port. The owner of Island French Resort is a Filipina married to a French photographer. She is one of the sweetest and kindest hosts I've ever encountered. She, together with Juvy (one of her staff at the resort), personally welcomed us at the port.

The resort was about 15 minutes away from the port, going through concrete roads and a short rough path down the hill. The property has six rooms, a swimming pool, and a beachfront to boot.

The airconditioned double/twin room costs Php 2950 for two persons, plus Php 500 for an extra person. It has two single beds put together, and can fit up to four persons with extra mattresses. Cozy and spacious enough, the room also features photographs by the owner as well as some shell accents all around. There is a separate toilet and bath, a vanity mirror, and a cable TV. The rate also includes a complimentary visit to the nearby Vanishing Island via the resort's private boat.


After settling down and freshening up and while waiting for our brunch, we explored the beachfront, which features cream sand and clear waters. The strip is not as long as you would expect it to be but staying in one of the picnic tables by the shore is such a relaxing experience as is.

Island French Resort has its own restaurant with a fantastic cook who makes a scrumptious sinuglaw (sinugba or grilled pork combined with kinilaw or tuna ceviche). The open-air restaurant also featires an exquisite collection of photographs taken in the Philippines and around the world and a unique lighting fixture that features giant light bulbs installed side-by-side.

After our delectable brunch, we went back to our rooms to rest for awhile while we were waiting for low tide. This is because we were advised that it is best to go to the Vanishing Island during this time so we can see the vast expanse of white sandbar.

At the cue of the resort's staff, we geared up and off we boarded the boat to the Vanishing Island. The sun was up and scorching and the sea was calm--a perfect day we thought. The island was so near, just about 5 to 10 minutes away from the resort.


Vanishing Island, as the name implies, vanishes when the tide is high and shows up like a glistening jewel when the water recedes. It has an expansive sand bar on both ends and some mangroves on one side. They said it is privately owned, so there is a minimal entrance fee. Make sure to generously put sunblock when you are going here as there are no cottages nor any kind of shade on the island.

The sun was scorching hot at first but when we were crossing the other side of the sandbar, the skies began to turn dark and wind started to blow. We ran under the abandoned house to seek refuge and just when we set foot beside one huge log post, the rain had started to pour hard. It was zero visibility and our boat was thrown far away from the shore by the unforgiving winds! I was one panic attack moment for us. We felt helpless and all we could do was wish that the rain would stop and that our boatman was ok.

The rain stopped after what looked like forever and when the sun started to peek into the skies again, we saw out boatman aboard the resort's boat being tagged by a smaller fishing boat. Thank God he was okay! We all then hopped on the boat and cruised back to the resort.

It was only 4:00 pm and we were already thinking about dinner. We wanted to try other restaurants at the town proper and so we asked Juvy to help us get a tricycle. Luckily, the owner was about to pick up her daughter from school, so she generously offered to bring us to the town proper.

She brought us to Aznebo Grill and Restaurant, which was a few meters away from the public market.

The ambiance was very Filipino--open air, with wood and bamboo accents. It is like a typical bahay kubo. There was a huge signage saying that you should clap twice to get the staff's attention, and so we did, and in a jiffy, the staff was there ready to take our orders. 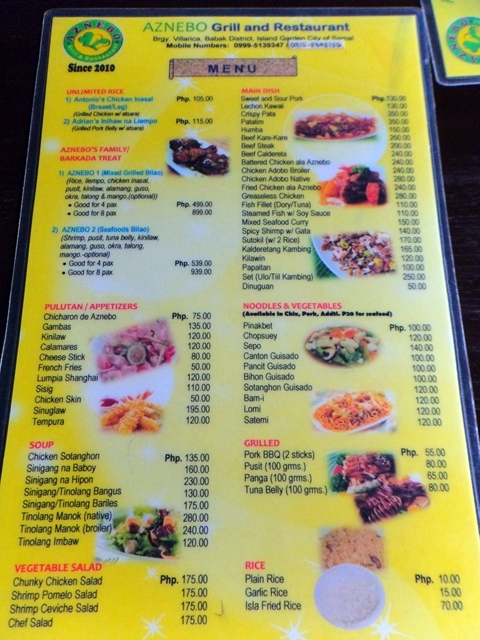 The menu was extensively Pinoy as well and the price points are reasonable. We ordered the seafood bilao, which was good for four persons (we were only three, by the way). For appetizer, we got a platter of cholesterol-rising chicken skin and ice cold sodas.


The serving was huge and can probably feed four people (true to its promise, that is). The shrimps and squid were well-seasoned, while we find the kilawin a bit overcooked in vinegar. The tuna belly was fresh but a bit over-grilled and tough.

After we had dinner, we walked to the market to find some fresh fruits. There were lanzones and rambutan at Php 30-35 and of course, durian. My hubby and friend bought some fruits for their "midnight snacks".

Going back to the resort via a tricycle that was contacted by Juvy, we were welcomed by the dramatic lighting all around the property...and yes, the giant light bulbs were everywhere! So cute!

The place was quiet and there was no nightlife so we were tucked in our sheets way earlier than what we would usually be. It was one of the most relaxing sleep I have ever had.

Morning came and it was time for breakfast. The menu? Corned beef, sunny side up eggs, rice, pancakes, and coffee. Very homey!

Since we were bound to Mati City after our short visit to Samal Island, we left the resort after breakfast at around 10:00 am. Before going to the port, we dropped by the Monfort Bat Sanctuary, a Guinness Book record-holder but we were disappointed that we had to pay a whopping Php 100 per person just to enter the cave even if we were just supposed to take snapshots.

We tried the passenger lantsa (ferry) going back to Sasa Wharf as recommended by the tricycle driver. It is pretty much like the ones going to Talikud Island or Guimaras. Travel time and fare are almost the same and if I must choose, I'd rather take the barge again. The barge seems safer and there is more leg room in the rows of seats. The lantsa appears to be overcrowded for me. Plus, the lantsa's docking site in Sasa Wharf is near the public market, so going out of the terminal will have you pass by the wet market and off to the main highway.

Our trip to Samal may be short and sweet but we had a great time, nonetheless. If you just want a quick escape from the hustle and bustle of the city and you only have a weekend to spare, then Samal Island is one option. Happy trip!
Labels: Babak District Davao Davao del Norte Island French Resort Samal Vanishing Island