I Left My Heart and Soul in Batanes (Part 5: Exploring North Batan)

It was our last day in paradise. How time flies! Now I understand why people say a three- to four-day journey in Batanes is not enough. Clearly, the place is spellbinding...every angle is postcard-perfect. The people are kind and friendly, and the culture, rich and vibrant. Batanes, indeed, stole my heart and soul.

To make the most out of our last day, we woke up early so we can walk around the quaint and sleepy town of Basco. Our North Batan tour would not start until after lunch then, so we still have plenty of time to buy souvenirs and explore the capitol.

From Palangud Homestay, we walked towards the town proper and looked for Vavayat, a souvenir shop also owned by Ryan Cardona of BISUMI Tours & Services. We didn't have a hard time finding it, as it's just near LBC and the hospital. If you are looking for cool souvenir shirts and other keepsakes, Vavayat is the place to be. T-shirts may be priced with a premium but the quality is better than the ones from other souvenir shops in town. You canq even have a customised souvenir shirt!

From Vavayat, we hopped on other souvenir shops like Wakay and another one near Petron to check out what's available. We got shirts and magnets from them, too!

On our way back to the homestay, we saw a bunch of corn being dried up in the sun. We also came across a fisherman who luckily got a few Dorado fish. Dorado is a kind of big fish that Ivatans cure with salt and dry in the sun for weeks. A whole slab of dried Dorado costs around Php 1,000.

We also passed by the Yaru Nu Artes Ivatan, a gallery that showcases the artworks of local visual artists in Batanes. The paintings and mixed-media art pieces here are worth checking out (and bringing home, too!) There are also handpainted shirts and ref magnets available.

I actually adore one mixed-media piece (acrylic and other items found by the artist) by Michael Malupa, which costs Php 15,000! Not bad for a beautiful work of art masterfully created with passion. I don't have Php 15,000, though. Too bad.

Here's a trivia: Have you ever wondered why staying at Fundacion Pacita is more costly than other prime accommodations in Batanes? It is because a portion of what you shell out goes to a fund, which supports projects of the local artists and education of the youth in Batanes, among others. Pacita Abad, sister of the current Budget Secretary Butch Abad from whom the lodge was named after, is an award-winning painter whose works were exhibited in more than 200 museums and galleries around the world. One of her advocacies is to nurture the innate talents of Ivatan artists. 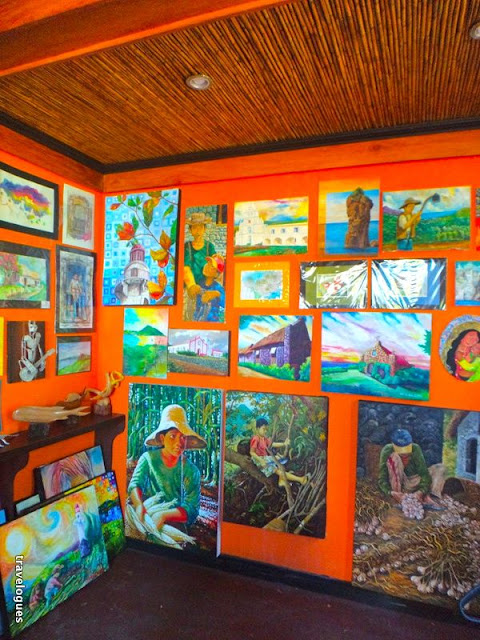 By lunchtime, we were already back at Palangud Homestay, and after resting for awhile, we walked again to Octagon Bed & Dine to eat. This bed and breakfast is just a few steps away from Palangud Homestay and it is also located along the highway.

If you've seen the movie "You're My Boss," starring Coco Martin and Toni Gonzaga, then you are probably familiar with this place. This is where they stayed (in the movie) during their visit to Batanes.

They said food here is great so we gave it a try. What did we order? Lobster, of course!

Lobsters are abundant and relatively cheaper in Batanes. We got a 450g lobster at Php 600 only, had it steamed, and voila! Lunch was served. Since it's fresh, the succulent meat is heaven in every bite. The fat...yes that bloody deadly fat...is so rich and addicting!

We also ordered a plate of calamares, which was just, well, so-so. Nothing special.

Exploring North Batan
After lunch, we started our tour of North Batan with our charming tour guide, Cindy Labrador of the Heritage and Tourism Office. North Batan tour takes shorter time than South Batan simply because it only covers the town of Basco. Tourists usually go here on the first day but we opted to do this last so we can still rest in the afternoon prior to our early morning flight the following day.

Our first stop was the Tukon Chapel (also known as Mt. Carmel Chapel). Perched on a hill, this chapel is made of coral and limestones reminiscent of the old stonehouses in Batanes. While it is not an official parish church, it is a famous venue for destination weddings because of its spectacular 360-degree view of the town of Basco.

Next, we went to the famous Fundacion Pacita Nature Lodge. Back in the day, when only the rich and famous can afford a trip to Batanes, this accommodation serves as their home for the duration of their stay as there were no other premium hotels or inns in the province. A stay here starts at around Php 7,000 per night, and a minimum of two nights stay is required.


Fundacion Pacita sells maps of Batanes illustrated on parchment. I was about to get a copy but unfortunately, it was out of stock. Sad.

On our way to the Dipnaysuhuan Japanese Tunnel, we passed by Basco Idjang, another scenic fortress that used to be a settlement of the Ivatans in the pre-colonial period.

Located in the hills of Tukon, the five-door Dipnaysuhuan Japanese Tunnel features a series of chambers, a bunker that serves as a lookout spot, and a water reservoir that was constructed during the Japanese occupation in the Philippines. It's pitch dark inside the tunnel so you need a guide who can help you navigate your way out. Oh, by the way, when I tried to take a photo of the tunnel from the outside in, I saw orbs depicting faces in the photo I captured so I stopped taking photos from that vantage point! That was creepy!

From the tunnel, we went next to Valugan Boulder Beach. An offshoot of the Mt. Iraya eruption in 400 AD, the long stretch of boulders is another famous spot in Basco. The waters crashing onto the humungous rocks as well as the endless view of the sea make it a must-see.

From the boulder beach, we went back to the town proper to pay a visit to Sto. Domingo Cathedral (also known as Basco Cathedral). This is the first parish church built in the province in the early 18th century. From cogon roofing in its early years, the church's roof was changed to galavnized iron in  the 1890's. When visiting the cathedral, please dress and behave properly.

Before proceeding all the way to Naidi Hills, we checked out Vayang Rolling Hills, which commands a panoramic view of lush greenery and the azure sea. Beware...its delicate slopes are sure to seduce you!

From Vayang Rolling Hills, we could already see the islands of Itbayat and Dinem. Itbayat is one of the three inhabited islands of Batanes, while Dinem is an uninhabited volcanic island located southeast of Itbayat. Itbayat can be reached via a 2.5-hour faluwa or a 10-minute small plane ride.

The views from Vayang Rolling Hills fare breathtaking. It was as if you were transported to a place called paradise. No fancy structure, no luxury resort...just the raw beauty of nature.

We braved the steps to the peak of the lighthouse and to our delight, we were rewarded with fabulous views of sun, sea, and sierra. I died for a second. It was awe-inspiring--the water, the hills, everything seems to be working in harmony, etching our minds with one of the best memories of Batanes!

In Batanes I learned this: you can enjoy life at your own pace, because here, time stands still. In life, you might be too preoccupied with your goals, too busy to appreciate the beautiful things and the bountiful blessings around you. In Batanes, it is as if God tells you to slow down, relax, and just take in the beauty of nature in its simplest, unadulterated form.

Dios mamajes, Batanes! I've learned a lot from you! Until next time!