I Left My Heart in Biliran (Part 2: Ulan-Ulan Falls and Iyusan Rice Terraces)

It wasn't part of our itinerary to go to Ulan Ulan Falls and Iyusan Rice Terraces. Since we were all tired and sleepless the night before our flight to Tacloban, we were almost convinced to skip this part, until Melo, our guide in Biliran, had persuaded us to join his uncle (Tito Sur) on a trek to the falls. And since it was all over the news that a typhoon was about to hit the country again, we'd rather do something on the first day than be sorry. It was an impromptu decision, but it was all worth it.

After checking in at Agta Beach Resort, we relaxed a bit and met with Melo and Tito Sur 20 minutes later. Melo drove the car while we all took the backseat. I was still tempted to take a nap but the lush greenery and the breathtaking views of the sea were too good to miss. After about 15 minutes, we arrived at the starting point of the trek to Ulan Ulan Falls in Barangay Sampao. There's no entrance fee here but guests are encourage to give donations for the proposed improvements in the area.

To go to Ulan Ulan Falls, we had to trek for 30 minutes on a mix of concrete, rocky and steep paths. We were warned ahead, but it was still challenging for us to go up and down the rocky cliffs!


According to Melo, there are proposed projects to improve the trail towards Ulan Ulan and Recoletos Falls. In the next few years, parts of the trail will become concrete and vehicles will be able to park halfway, thus making the trek time shorter.


Please make sure you bring lots of water when you go here. The trek under the heat of the sun might drain you. The supposedly 30-minute trek took us longer because I had to stop from time to time to breathe in. Hello, no exercise since birth. Sorry! =P

The long and heart-thumping hike was all worth it. When I saw the falls and heard the water crashing into the giant rocks, I felt rejuvenated. Beautiful!


We stayed at the foot of the falls for a few minutes, savoring the cold mist from the water. Okay, going here was challenging for me, how much more to the second level? My legs were getting numb already so I told the group I'd just stay at the hut halfway. The rest of the group went up to the second level - the Recoletos Falls. It would take another 10-15 minutes to get to there. The falls has a natural pool and is conducive for swimming. Be warned though that the water could get really cold!

As soon as the other group went down, we hiked back to where our car was parked. There, the locals offered us fresh buko (coconut) juice straight from their tree. We gave them Php 20 as donation (and as way of saying thank you to the sweet and refreshing buko juice!).

We started driving back to Naval and along the way, we made a quick stop at the Iyusan Rice Terraces, Biliran's version of the famous "Eighth Wonder of the World" in Banaue. Though Iyusan Rice Terraces is not as vast as Banaue's, it still captured our eyes with its verdant vegetation. 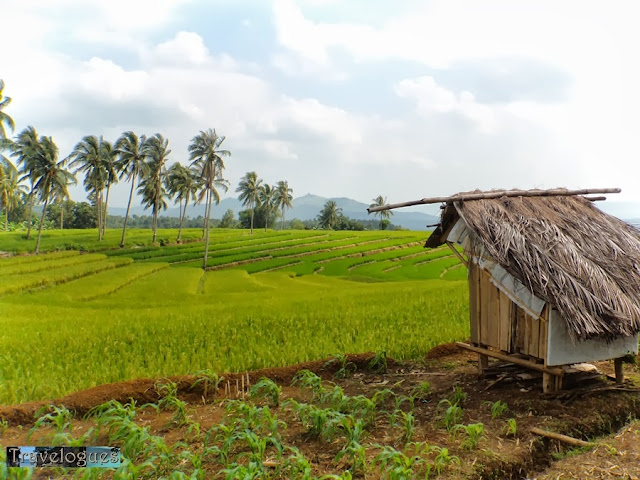 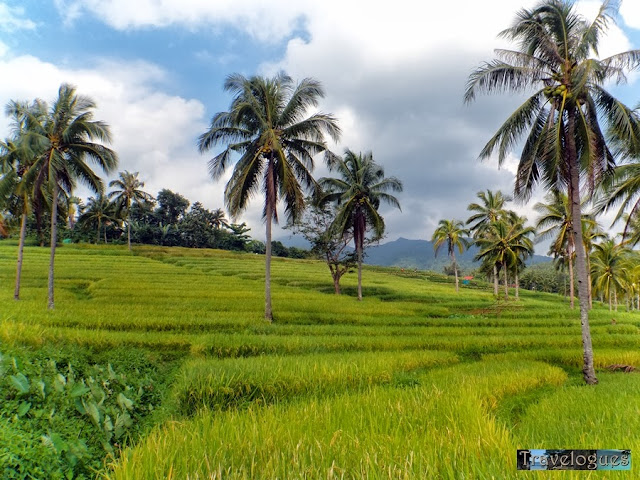 As a sweet bonus, some locals here sell Cavendish bananas at Php 10 per bundle. Yes, per bundle, not per piece. Amazing deal!

For those who would like to check out Ulan Ulan and Recoletos Falls as well as the Iyusan Rice Terraces, multicabs are available for hire, with price ranging from Php 1000 and up. This can already fit 6-8 pax.

There are many other falls in Biliran but we just cut our itinerary into two: Ulan Ulan and Recoletos. There's also Tinago Falls in Caibiran, but Melo said for him, Ulan Ulan and Recoletos are his personal favorites. There's also a hot spring called "Mainit" near Tinago Falls but we didn't have the time to check it out. A reason to go back, perhaps?

After touring around, we headed back to Naval to have lunch at Lola Tanang's and buy some groceries in the market.