Tacloban is the capital city of the province of Leyte. Once a witness to the Philippines' bygone days, it is now a highly urbanized city teeming with commercial establishments and a melange of both old and modern infrastructures. Located some 360 miles southeast of Manila, the Philippine capital, Tacloban is easily accessible by air, land and sea.

On our recent trip to Tacloban, we couldn't help but explore the city, its historic sites as well as famous gastronomic havens. Let me share with you how we were able to go around the city.

Leyte Landing Memorial
Located in the municipality of Palo, at the so-called Red Beach, this memorial is where General Douglas MacArthur and his men had landed in 1944. These larger than life bronze statues depict the general together with President Sergio Osmena, General Carlos P. Romulo, General Sutherland and a few others. The memorial is nestled on a man-made pond and has the picturesque red beach and a glimpse of Samar Island on the background. 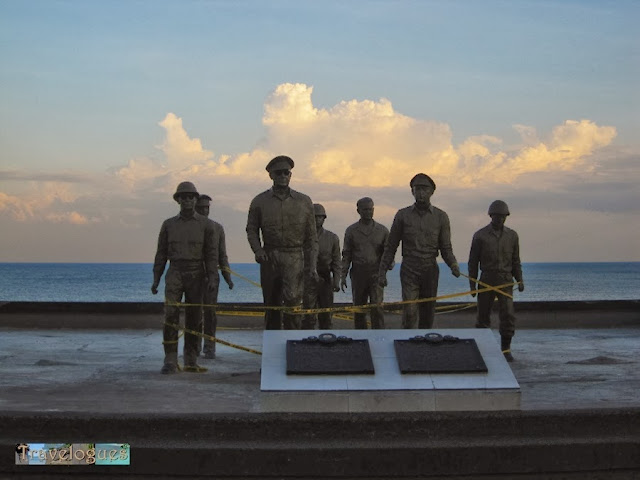 From Hotel XYZ, we walked about two blocks away towards the port (you will see a McDonald's here) and boarded a jeepney bound to Baras (not Marasbaras). You can also take a jeepney with a signboard "Government." These jeepneys will pass through a series of government agencies until it reaches a corner where the park is. Alight before the jeepney turns right.

Aside from the huge 10-feet statues, the park serves as the People's Center where locals and tourists can just laze around. It's a cleaner version of Rizal Park. As in way, way cleaner.


From the park, you can either walk to the rotonda or hire a tricycle. We chose to walk. It's quite far but it's okay since we were all surrounded by lush greenery and amazing views. Unfortunately, while walking halfway, rain poured and we had to stop in front of these beautiful columns. No jeepneys and tricycles were available that time so we had to wait until the rain stopped.

San Juanico Bridge
A 21.9 million dollar project of the late President Ferdinand Marcos, this bridge stretches from Samar to Leyte across the San Juanico Strait. With about 3 kilometers in length, it is the longest bridge in the Philippines above a body of water. It is believed that this bridge was a gift of the late president to his lovely wife, Imelda Romualdez-Marcos.

From Hotel XYZ, we hired a tricycle to bring us to San Juanico Bridge. At first, his rate was at Php 250, but we were able to haggle it to Php 200. The guard from the hotel said we could also ride a jeepney to San Juanico and alight at the foot of the bridge, or take a bus bound to Sta. Rita, Samar and alight at the bridge's center. We figured it's a bit inconvenient so we decided to hire a tricycle instead.

Upon entering the shrine, we were asked to remove our footwear and change into slippers. We were about to change when the lady at the reception called our attention and said "lumilindol! (earthquake!)." We did not feel it at first until we saw the chandeliers inside the shrine swinging left and right. We rushed outside the shrine and waited until the quake stopped. We immediately opened our Facebook accounts to see what had happened. We were surprised to see photos of ruined churches like centuries-old Maribojoc, Loon, Loboc, and Baclayon in Bohol, as well as the Sto. Nino Church in Cebu. It was the 7.2 magnitude October 20, 2013 quake that killed about 200 people in Bohol and Cebu. Oh my gosh! It was scary! In Tacloban, it was magnitude 5. Thank god we left San Juanico Bridge already, or else I might have my own version of temple run there!!!


The Sto. Nino Shrine and Heritage Museum was the former mansion of President Ferdinand Marcos and his first lady, Imelda Romualdez-Marcos. The first lady is known for being a devotee of Sto. Nino, thus, the construction of this shrine in Tacloban.

Since it is now managed by the PCGG (the property is part of the alleged ill-gotten wealth of the Marcoses), a minimal entrance fee is imposed.

After the earthquake, our guide called us and we proceeded with the tour of the mansion. We started with the guest rooms on the first floor, most of which are named after a particular place in the Philippines. There were dioramas in every room, each representing a milestone in the life of the former president and the first lady.


The guide told us stories about each and every furniture in the mansion. He said that most of the stuff there were gifts from different dignitaries and personalities across the globe. Whether this is true or not, one thing is for sure - it's one hell of a vast collection!


We couldn't help ourselves but be awestruck with the collection inside the heritage museum. These are priceless treasures!

The second floor mimics the president's home in Malacanang Palace. Its opulent interiors is something that would best fit a king and a queen.

Yes, the former president and the first lady had separate rooms. Why? No one could answer. Not even the guides. Imelda's room radiates the luxurious life they lived before. Imagine having her own Jacuzzi at that time! And a bathroom that could fit my kitchen and living room in it!

So when you happen to go to Tacloban, take some time to stroll around and learn more about our country's rich history, controversies and a lot more. I used to hate history and geography way back my high school days, but hey, look at me now, I am actually writing about it! Cool!