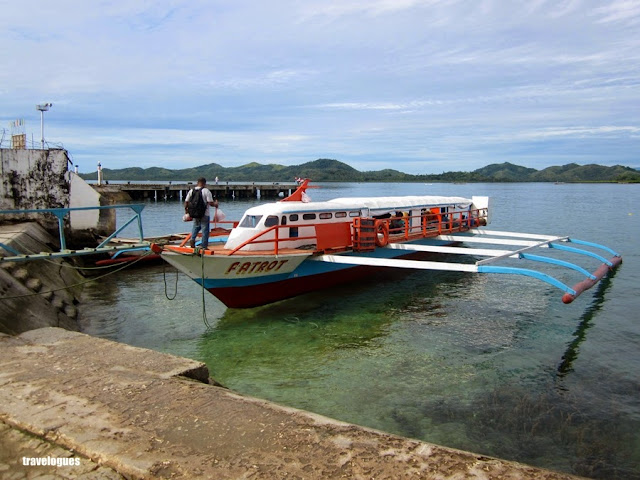 It was the last leg of our Surigao adventure, and as the old song goes, we saved the best for last.


How to go there:

From Sayak airport, hire a habal-habal (motorcycle that can accommodate up to three people) bound  to Dapa  port. Standard rate is Php 200 per trip. Make sure to ask the tourism help desk about it and hire only those who are accredited by them for safety purposes.

If you are coming from General Luna or Cloud 9, hire a habal-habal or arrange a private transportation from your resort/hotel to Dapa port. Should you wish to hire a boat that will bring you directly from General Luna to Bucas Grande Island, you may do so but be prepared as it comes with a hefty price. Mang Lito, our boatman during the three-island adventure in General Luna told me that his rate is Php 4,000. However, I remember when I inquired from him months back, he said it's Php 7,000 (perhaps he did not remember me, hehe). He's a bit inconsistent but he's nice. You may reach him via his mobile at 09073103333. 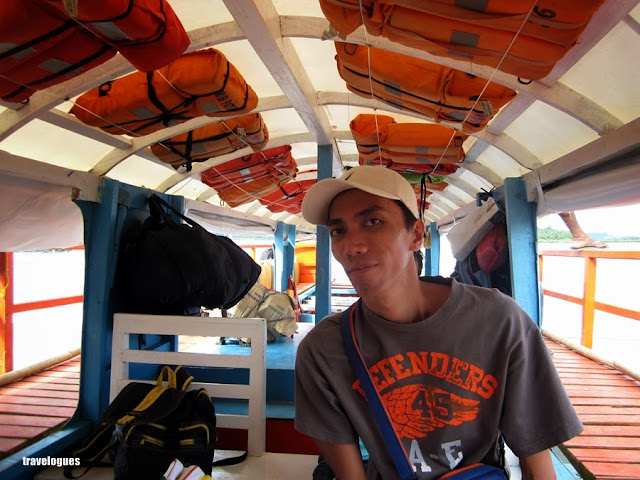 Should you want to take the public boat at Dapa port, there's one boat bound to Socorro that leaves at 8:00 am and another at 4:00 pm. Please make sure you are there ahead of time as the boat leaves as soon as it gets full. No reservations here. Fare is Php 100 and travel time is an hour.

Cebu Pacific also flies from Manila to Surigao via Cebu.

From Surigao Integrated Bus Terminal, ride a Bachelor Bus or van bound to Hayanggabon, Claver, or Tandag City. From Hayanggabon port, hire a private boat that will bring you to Bucas Grande Island/Sohoton Cove National Park.

There are daily flights from Manila to Butuan. From Butuan airport, go to the bus terminal and ride a bus to Surigao. Alight at Bad-as junction and wait for a bus or van to Hayanggabon. From Hayanggabon port, hire a private boat that will bring you to Bucas Grande Island/Sohoton Cove National Park.

Whichever way you choose, the tourism office of Sohoton National Park will be happy to assist and provide you with an accredited boatman.

The boat ride was swift. Midway, we passed by some sort of a river-like body of water where the boat had to slow down and maneuver against giant rocks and shallow water. We arrived at Socorro port at a little past 9:00 am.

At Socorro port, one of his tour guides, Reynan, greeted and led us to our private boat. Our boatman was Jimuel and the boat can fit around six people excluding the two boatmen.

From Socorro, Jimuel brought us to Sohoton National Park where the tourism office is located. On our way, we were welcomed by beautiful rock formations and deep blue crystalline waters. The water is divine -- even in its deepest, we could see that it was clear. Amazing!

Upon entering the entrance to Sohoton National Park base camp  (tourism office), we couldn't help but be enthralled by the views! It's captivating. Our hearts were left there! I couldn't get enough of the clear water!

At the tourism office, Sir Dodo welcomed us and gave us a short background of Bucas Grande Island. 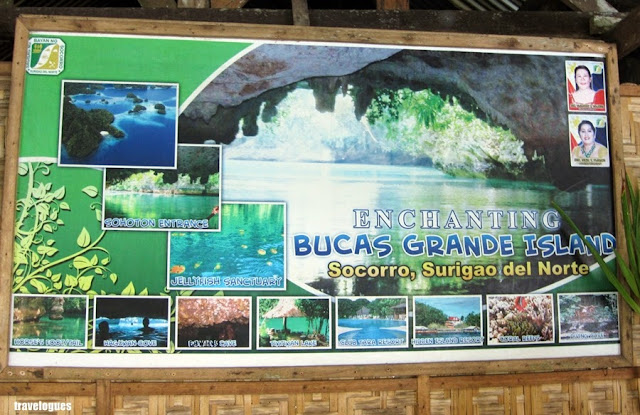 He then asked us to gear up as we were about to go inside Sohoton Cove, the highlight of this trip. Sohoton Cove is half-submerged in water and the entrance/exit disappears at high tide. Sharp rocks are also at its mouth, so we were instructed to wear a helmet. We transfered to a smaller boat enough to fit the three of us and the boatman and the two tour guides.

Going through that hole and seeing what a  wonderful world was waiting inside was a magical experience! It was breathtaking. It was the same feeling I  had when I entered the tangke saltwater lagoon in Islas de Gigantes, big lagoon in El Nido and Kayangan Lake in Coron.

There are three attractions inside Sohoton Cove: Horse Foot, Hagukan Cave  and Mag-kukuob Cave. Just a few meters from its mouth is the Horse Foot rock formation. Aptly named, it resembles a foot and leg of a horse, as if suspended above water.

It was so quiet and serene inside. All we could hear were the chirping birds and the movement of the water.

We first went to Hagukan Cave, a small dome-like cave that is accessible by swimming beneath a rock. Think about another version of that Secret Beach in El Nido. The only difference is that here, your boat can really get close to the entrance of the cave. And there's no beach inside. I did not swim here as I find it hard to go back to our minuscule boat, but hubby and my friend were able to do so. I wish the boats here have a small ladder for people like me. It's a requirement for me, actually, hehe!

Our tour inside Sohoton Cove ended with an adrenalin-packed activtiy: spelunking and cliff diving at Magkukuob Cave! I already told the boatman that there is no way I am jumping off the cliff, so it was only hubby and my friend who risked it all and climbed the cave. Hubby was able to jump into the water twice. Yey!

After our tour inside Sohoton Cove, we went back to the base camp and had our lunch. We just brought our own food and eat it at the tables provided at the tourism office. But, if you'e a big group, the tourism office will be happy to make meal arrangements.

After lunch, we continued our tour at the Jellyfish Sanctuary. Here, we had to ride a small paddle boat almost the size of a kayak to get through. Motorized boats are not allowed inside the lagoon as it can kill a lot of jellyfish in there. One tourist = one paddler/paddle boat.

I couldn't get enough of taking photos of the clear water. Seriously, I haven;t seen such a clear shallow water like that!

It might not be the right season, but there were a lot of stingless jellyfish at the lagoon nonetheless. It was a nice experience having to touch their soft, Jell-o like bodies. But one thing I noticed is that most of the have incomplete tentacles already. The boatman said their tentacles are very fragile that when you touch it, it falls off easily. Though it might also be a great experience to swim with these lovely angels, I am so glad that they had prohibited swimming at the lagoon so that the jellies won't get disturbed and poisoned by what we thought was our beach best friend -- sunblock.

We spent around 20 minutes at the Jellyfish Sanctuary and went back to the base camp for our last leg of the tour. We paid our fees and boarded Jimuel's boat and we were off to Marka-a beach where we would snorkel.

The beach is short but very picturesque. The warm fine white sand is soft and relaxing to the feet. The water is undeniably clear, and the marine life is beautiful but not breathtaking. The corals are mostly dead, but we're glad to see a couple of clownfish in there. 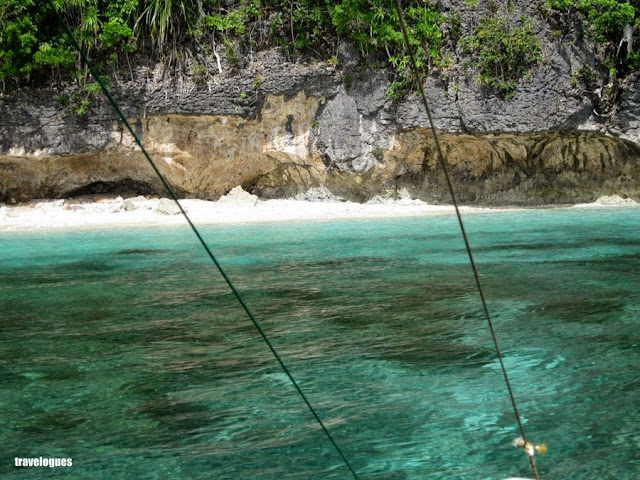 After snorkeling at Marka-a beach, we hopped on our boat and headed to La Fortuna beach where there's supposed to be a lake. On our way, we saw the infamous Club Tara Resort. From afar, I could see the rooms and arrived at a conclusion that it might not be worth it to stay there. First, there's no sandbar and you'll live on stilts. I did not see any enticing facilities, too. So for the price, I guess there are better options. Just like what we found at La Fortuna!

A few minutes later, we arrived at La Fortuna Resort and were welcomed by the friendly caretaker and a glistening stretch of powdery white sands.


And, the sweetes bonus at La Fortuna Resort is that (drum roll please!!!!) You have this beautiful lake all to yourselves!!!

We trekked for about 10 minutes to reach this lake, and the effort was more than worth it. This reminds me of Kayangan Lake in Coron, minus the exhausting long trek and the crowd.

The caretaker said they also have another resort just beside La Fortuna Resort which has a swimming pool. They are renting that out for Php 10,000 a night.

After swimming at the lake, we headed to our last destination -- Cinnamon Island. We were just about to have a shower and change clothes here so I wasn't able to take photos. This is also a famous overnight spot in Bucas Grande Island. The lady told us that they have rooms as low as Php 600 per night good for two. They can accommodate big groups, too. We were supposed to have some cinnamon tea but it was getting late already so we just bought a few barks to bring home at Php 100.  Note: if you don;t have check-in baggage allocation, you will not be able to bring this home.

Between La Fortuna Resort and Cinnamon Island, we like the former more. Value for money, good beach front, and complete kitchen facilities.

After changing our clothes, we started our journey back to Hayanggabon where we will take a bus back to Surigao. We're going back to Almont Beach Resort to spend the night.

By  a little before sunset, we arrived at Hayanggabon port. There were gentlemen who were offering us to ride their van to Surigao at P120 per pax but we figured out the van might be too tight for us and our things. So we walked towards the highway and found a bakery. We stayed there while waiting for the bus.  In less than 15 minutes, the bus came and we were off back to Surigao City!