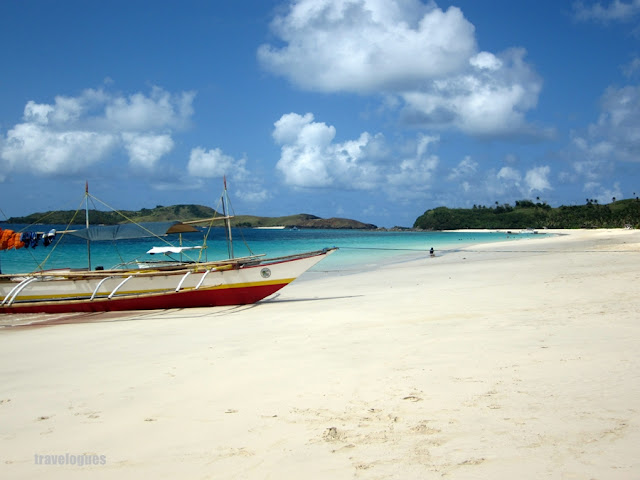 I've been reading raves about this group of islands in Camarines Norte ever since I started blogging. Comments like "best beach ever", "better than Boracay", and "unspoiled, virgin beach" are the most common reviews I read online. The photos on Google's image search look stunning, too! So, I said, I have to see it for myself. And just like a puzzle piece falling into place, I had the chance to check this out early this year. And you guessed it right...it's an impromptu trip.

This divine destination named Calaguas Group of Islands is nestled in the Pacific Ocean, off the eastern seaboard of Bicol region, within the jurisdiction of Vinzons, Camarines Norte. It is comprised of more than 20 islands and islets, including two main islands of Tinaga and Guintinua. There are also three barangays named Banocboc, Pinagtigasan and Mangcawayan. The most common beach destination is called Mahabang Buhangin in Tinaga Island, which boasts powdery white sands and crystal clear waters.

How to get there:

From Daet, take a jeepney to Vinzons (around 45 minutes), or hire a tricycle (Php 100 per way, less than 30 minutes). You may opt to go straight to the fish port where you can rent a boat to Calaguas, or you may go to the public market first near the municipal hall to buy your supplies before heading to the port.
2. Via Paracale
Ride a bus from Pasay or Cubao to Daet. Alight at Talobatib, and from there, ride a bus or van to Paracale. Travel time is less than two hours.

There used to be a direct flight to Daet (I remember that Seair ad with Marc Nelson on it), but because buses are way cheaper despite longer travel time, Seair ceased to operate this route. But if you still want to cut our trip short, you can board a plane to Naga (earliest flight is adviseable) , and from Naga, take a public van to Daet. You can  find these vans at the Naga Van Terminal near SM, the same terminal where the public vans to Sabang (gateway to Caramoan) are. Travel time is around two hours. From Daet, you can ride a jeepney or tricycle to Vinzons port.

Where to Hire a Boat?

You can rent a boat to Calaguas at the Vinzons fish port. Small boats that can fit around 5 people range from 3,000 and up. However, I highly suggest that you get a bigger boat because the waves en route to Calaguas are strong and unpredictable. Our boat was big enough to fit around 10 to 15 people. It costs around Php 8,000, assuming that you'll rent a boat with the same size as the local government unit's boat (Bantay Dagat).

For boat rentals, you may get in touch with Vinzon's Tourism Officer-Designate and Accountant, Mr. Noli Pajarin at 09206611018. He does not own a boat, but as a tourism officer, he surely knows to whom to refer you. He can also guide you on your planned trip to Calaguas.

For this trip, we opted to take the Vinzons route. We chose Philtranco's Gold Service bus from Pasay to Daet that leaves Manila at 9:00 pm, with the expectation that the bus is more comfortable than regular aircon buses. Fare is Php 730.

The bus is the same as Philtranco's buses that ply Pasay-Clark DMIA route. In my honest opinion, the "GS" bus is nothing extraordinary. The bus itself is not so new. The seats are not so comfy and feel like an ordinary aircon bus. There is no ample legroom as what we have expected. I couldn't imagine how their regular aircon bus looks like. The CR is not clean, and what's worst, since it has a "CR" onboard, there is no stopover. So, you are obliged to use the not-so-clean toilet, or hold your pee until you reach Daet. The only pro I think is that it is fast (we left at 9:30 and arrived in Daet at around 5:00 am). So, shedding that extra Php200 bucks compared to a regular aircon bus (around Php 513) isn't worth it at all. Natanso yata kami.

On our way back to Manila, we asked the locals for other options. One said DLTB doesn't have coach buses, but their units are new. Lo and behold, we chose the DLTB bus scheduled to leave Daet at 3:00 pm. At Php 513, this bus is worth it. The bus is new and clean. The driver is cautious and the conductor is attentive. It doesn't have a CR onboard, but it promised to have 2 bus stops for snack- and pee-breaks. As a bonus, passengers have free WiFi access. So for me, DLTB is more sulit.

We arrived Daet at around 5:00 am. It was still dark then and we were already starving from our long haul trip. We hired a tricycle to bring us to the nearest eatery. After five minutes, we arrived at a sizzling-tapsi house in front of the public market. Fare was Php 10 per pax. We also asked the tricycle drivers if they can bring us to Vinzons. They agreed to wait for us and bring us to Vinzons at Php 100 per tricycle. We hired two tricycles since we were five in the group. 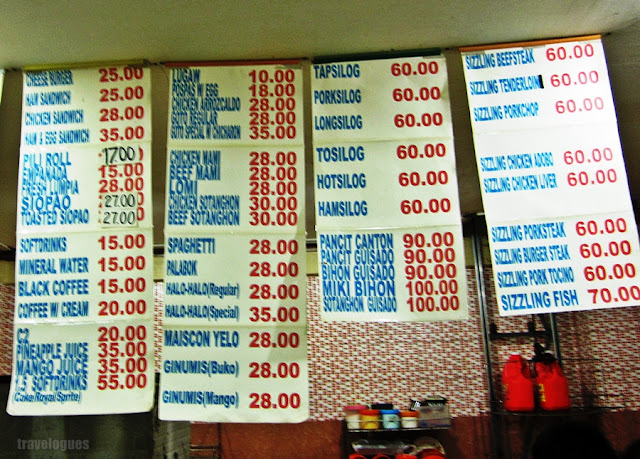 Food here is affordable and the servings are huge. The taste did not disappoint, too! I ordered sizzling porkchop at Php 60, plus, I asked my friend if we can split an order of chicken mami. She agreed and we paid  Php 14 each. So, at Php 74, I can say that it is so worth it. We left the eatery with our tummies full to the max.
As agreed, the two tricycle drivers brought us to the town of Vinzons. They said that it is about 30 to 45 minutes away from Daet, but we arrived at the municipal hall in 20 minutes!

Sir Noli instructed us to go to Vinzons municipal hall where he will meet us shortly. While waiting for him, two of my travel mates went to the public market at the back of the municipal hall to buy our supplies. We spent less than Php 400 each for our food. This includes lunch, dinner, breakfast, and lunch for the next day. Our menu includes crabs, pork adobo, fish, rice, softdrinks and veggies. It also includes a bottle of rum for some night booze!

When Sir Noli arrived, he hailed two tricycles to bring us to the port where our boat awaits us. His group will be on a convoy. Unfortunately, our tricycle drivers misunderstood Sir Noli's instructions and had brought us to the fish port.

Tip: If you plan to bring some crabs for your camping meals, buy at the fish port. The locals said it is cheaper there, plus crabs sold at the market are a bit smaller.

Sir Noli sent someone to pick us up at the fish port. The port where we were supposed to meet is just less than a kilometer away. For those who will bring their private cars, you can leave it here for a fee.

Our boat can accommodate 10 to 15 pax. In my opinion, it is better to get a big boat even if you are only few in your group. The waves in the Pacific Ocean can go crazy and you wouldn't want to risk it. Plus, make sure the boat you will rent has  ample life vests. Again, safety first. Please bring plastic bags for your belongings. As I have said, waves here are unpredictable. Expect to get wet!

We were also escorted by the chief of police of Vinzons as we were advised that Calaguas Group of Islands is currently on high alert. This might be due to the forthcoming election. But Sir Noli assured us that it is generally peaceful on the island. Again, safety first. Don't fret!

The boat's engine started, and the next thing I knew, we were cruising on a calm river surrounded by verdant mangroves. This river, with around 3km loop, is envisioned to be another tourist attraction in Vinzons. The plan is to have floating restaurants like the ones in Loboc (Bohol). The river is actually longer than Loboc, and since seafoods are abundant in Camarines Norte, the plan is to serve the freshest seafood catch onboard. I hope this will materialize in the near future.
After cruising on the scenic river, the vast open sea welcomed us. On our left, we saw a glimpse of Maculabo Island - another island I've been wanting to see. I hope I can visit it this year, too!

Generally, our boat ride was calm, with just a few instance of roaring waves. Just a piece of advise, before you go to Calaguas, take time to browse this:

This is a website that gives wind and wave forecasts, so you have an idea beforehand how big the waves are. When we went there, it was at 1.8m - 1.9m. In February, it went up to 3m! No wonder Sir Noli advised us not to pursue the trip then. It can go flat on some months.

Up next: Our Calaguas Escapade!