Four years ago, Boracay's Station 1 used to be a piece of paradise. As far as I can recall, there was a big empty space between Discovery Shores (it was the creme de la creme of Boracay resorts then until Shangri-La opened in 2010) and the rest of the resorts and hotels in Station 1. You can bask in the sun with utmost privacy. That time, it was worthwhile to walk that far from D'Mall towards Discovery Shores. Well, that was four years ago. Gone were those days.

We went back to Boracay last year and we're surprised (well, not really as it was all over the news and social media) to see that what used to be a paradise has turned into a big chunk of cluttered inns and maddening crowd. Sad. How on earth did all these structures mushroomed in such a short time? It now looks like Manila sitting atop powdery white sands and blue waters, complemented by chirping birds of a thousand foreign languages.

Moving on, since I got stressed and bored at the white beach (just looking at all the people passing by infront of Casa Fiesta made my eyes tired), we embarked on some island hopping activities.

Our meeting point in on Bulabog Beach nestled on the eastern side of Boracay Island. There were like a thousand people in that area, too! It used to be one of the underrated beaches in Boracay. But now, it's the center of water activities on the island, thus, the influx of people and hotels/inns to accommodate them. Gasppp...

We went snorkeling but I didn't enjoy that much. Few varieties of fish, dead corals, garbage on the seabed. So, if you have snorkeled under the waters of Palawan or Bohol, skip this activity in Boracay. You'll just get disappointed.

But one place had captivated my heart as soon as we docked on its long stretch of white sand - Ilig-Iligan Beach. Located on the northeastern side of Boracay, this beach is perhaps the most quiet spot on the island. It has the same white pwdery sand as the main beach, less the mind-boggling crowd. What I like about this cove is that it not too crowded  nor too isolated. We were even able to order pancit and some grilled stuff at a quaint eatery. There are also some huts for picnics. Kids can enjoy here as the waves (depending on the season) are calmer on this side.

I just hope that when I visit Boracay again, Ilig-Iligan Beach remains a laid-back, quiet nook of one of the world's most beautiful islands. Please, spare Ilig-Ilgan Beach from the chaos. I'm begging you! Enough is enough. 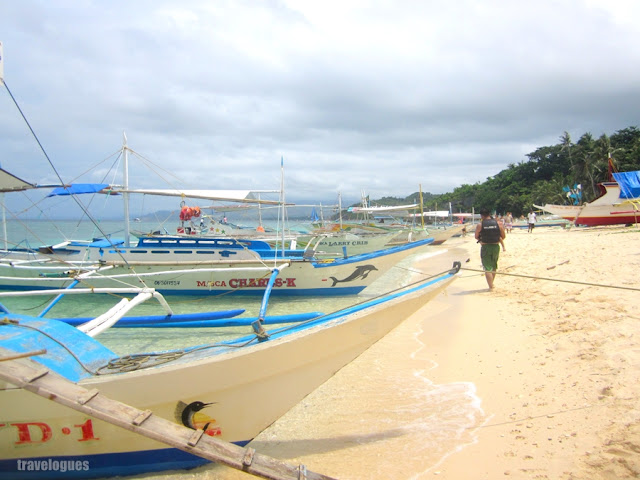