Determined to see as many islands of El Nido as possible, we engaged in another exhilarating island hopping tour on our third day. This time, our itinerary is tour C - popular for its inclusion of the Secret Beach.

Our tour started at 9:00 am. We assembled in front of Ricsons, just a few steps away from Marina Garden Beachfront Inn. We were joined by four other guests - two Filipinas and two French guys. Genson was still our tour guide for the day.

Braving the strong waves of the West Philippine Sea, we had finally arrived at our destination - Matinloc Shrine - the only destination in El Nido where it is not the beach nor the underwater is the main attraction.

Out of curiosity, I asked the boatman why the waves were so strong when in fact the habagat (southwest monsoon) period had ended already. The boatman confirmed that contrary to what others believe, it is actually better to go to El Nido during the habagat months as the winds and waves are calmer. So, lesson learned, you can actually enjoy Palawan more during the lean months of the habagat season. Just pray that there's no typhoon!
At Mtinloc Shrine, we were welcomed by beautiful rock formations that lead to a chapel. The place radiates a certain serene vibe like a retreat house. On one end of the island is another viewing deck that commands a magnificent view of the Bacuit Bay.

From Matinloc Shrine, we cruised the bay again in order to get to our next destination - Hidden Beach. You guessed it right, the beach is kinda "hidden" by the limestone karsts, thus, the name. From the boat's ladder, Genson had to drag me afloat towards the entrance so as not to hurt myself with huge sharp rocks under the water.

The Hidden Beach is really a secret paradise. It is so tranquil inside, with just the sound of waves as the background.

The water is shallow and calm inside the Hidden Beach. Our guide led us to the spot where we found an anemone with a few clownfish circling it. There, I found Nemo again.

Still can't get enough of all these "hidden" and "secret" things in El Nido, we had moved on to the Secret Beach where we had to literally swim inside a small hole to get inside. The entrance is rocky so make sure to wear your aqua shoes!

Though I like the fact that it is tucked in an enclave of picturesque rock formations, the Secret Beach is quite a small and pebbly beach for my liking. But if you want to hide from the bustling city, you can go here for some me-time. Just make sure you do not go here during the weekends and holidays as it gets crowded sometimes.

For lunch we stopped at Talisay Beach. From afar we can already see the turquoise water and glistening white sand.

While waiting for the boatmen to serve our food, we went snorkeling and swimming at the beach. Lots of fishes were there, too! Just a few meters from where we were snorkeling is a deep coral garden perfect for intro diving.


Talisay Beach ranks second to the most stunning spots among the islands included in Tour C (the first being Cadlao Lagoon), at least for me.

Tummies filled to the brim, we left Talisay Beach with a wide smile. Next stop: Helicopter Island

Helicopter island is one of the nearest islands to mainland El Nido. As the name implies, it resembles the shape of a helicopter. The waves here are as strong as Entalula Beach, so after photo ops, we hurried to Cadlao Lagoon. 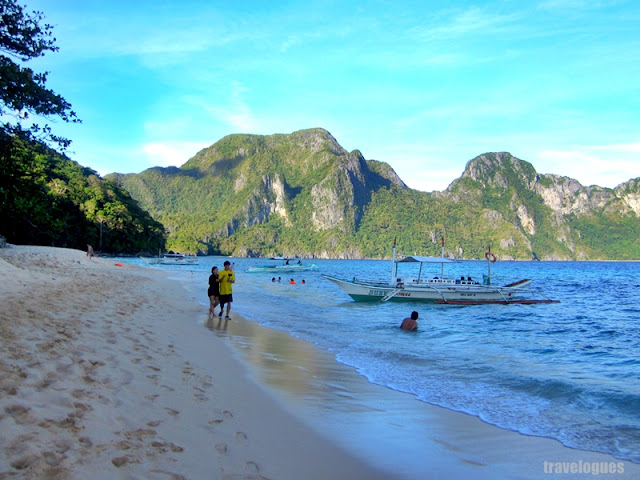 If you have seen photos of your friends sitting on the tip of the boat, backdropped by sharp limestone karsts and cerulean water, chances are, these photos are taken in Cadlao Lagoon. Just on the other side of Helicopter Island, the Cadlao Lagoon is one of the most beautiful lagoons in El Nido, yet it is not as hyped and as well-visited as the Small- or Big Lagoon. 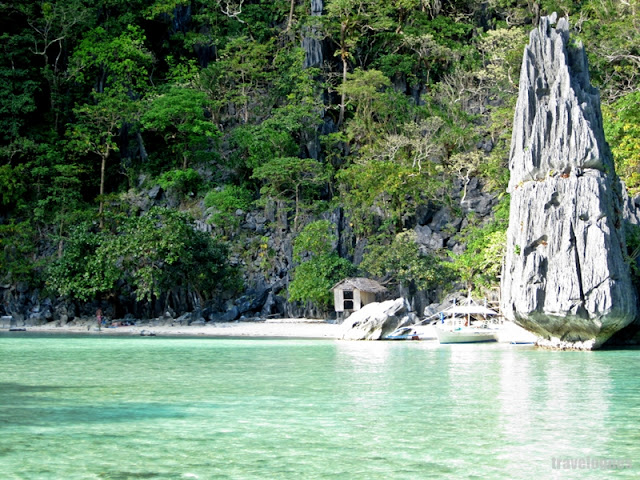 Besides its crystal clear waters, the lagoon is so calm like a natural swimming pool. You can enjoy snorkeling here, and feast on corals. We also found Nemo here.

We spent the rest of the day at Cadlao Lagoon and went home with a smile. Indeed, El Nido is a magnificent place. I like it more than Coron for these reasons:

1. There are a lot of pristine beaches in El Nido located a few kilometers away from the mainland. In Coron, there are pristine beaches like Malcapuya, Banana and Malaroyroy (now Two Seasons Coron), but they are quite far from the mainland (usually requires a minimum of two hours by outrigger boat). Though I haven't seen the other side of Coron which includes Pass Island and many more, I just feel that the beaches there are beautiful but too far from each other. Thus, it requires more time and can be more expensive.

2. In El Nido, the fee is centralized. In Coron, you pay on each island.

4. I enjoyed snorkeling in Simizu than in Siete Pecados. The fishes in Simizu are more proactive and huge!

5. I didn't have to climb several steps to reach the beautiful lagoons in El Nido. In Coron, I had to trek our way up to Kayangan Lake.

Bottomline, I just adore Palawan! And I think I won't get tired of going to the last frontier over and over again. I will definitely go back to El Nido and try luxurious camping by Lee Goldman. What about Tour D and E? Sounds cool!