Back in grade school, my teachers would always ask us to compile postcards of the most stunning places in the Philippines. Magellan's Cross was my staple, and so was Pagsanjan Falls and the Chocolate Hills. But of all these wonderful-looking postcards, only one had etched a special mark on my mind - the alluring El Nido in Palawan. Those beautiful towering limestone karsts, the turquoise waters, and that impression of tranquility had captivated my heart. So, when I grew up and had the chance to travel around the country with my husband, I made sure to put this on our bucket list. And as if an answered prayer, on a cold New Year's eve, we found ourselves booking round trip tickets to Puerto Princesa, our gateway to El Nido.

Why some people are hesitant to go to El Nido:

People think it's expensive. I beg to disagree.

Contrary to what most people think, wandering in El Nido does not mean splurging on a $400 villa. El Nido is not just about El Nido Resorts (the developer of luxury resorts such as Lagen, Miniloc, Pangulasian and Apulit) rather, it is a quaint municipality in Northern Palawan. You can actually explore and enjoy El Nido on a shoestring.

For me, it is one of the places in the Philippines that's very backpacker-friendly because it has myriad affordable accommodations available that varies from pension houses, inns and native cottages. You can even get a room for less than a thousand bucks!

Food may be costly if you eat in the restaurants. But then again, who told you to do so? There are a lot of cheaper food options around El Nido. A public market is just around the corner. Here, you can buy basic tummy fillers like bread at Midtown Bakeshop, grilled street foods, rice meals, and even liquor at grocery prices.

The tour rates are also standard, and there is a fixed environmental fee of Php 200 that allows visitors to explore all the islands for a period of 10 days. Unlike in Coron (sorry for the comparison, but reality bites) where you have to pay different entrance fees for almost every island and attraction you'll visit, going around El Nido turns out cheaper and more convenient.

Accessibility is a major concern. Again, I disagree. If there's a will, there's always a way.

Direct flights via Island Transvoyager (ITI) may be quite expensive especially if you are on a backpacker's budget. It usually costs around $450 round trip. But with the onslaught of shuttle vans like Lexus that traverse the Puerto Princesa-El Nido route, it became more accessible and affordable to tourists. Fare is Php 700. Gone were the days when people had to endure long, dusty and uncomfortable ordinary bus rides in order to reach El Nido. There are also RORO buses (aircon and non-aircon) bound to El Nido at the San Jose terminal. Another blessing is the addition of more flights (cheaper at that) to and from Puerto Princesa via local carriers. Our tickets for instance, are dirt cheap at Php 600 round trip (on a promo).

Our Major Trip of the Year

Since our tickets were booked way, way ahead, we had a lot of time to do our research. I am so lucky, too, to have known Charisse (La Tiara Tours - 09178094509), who patiently answered all my queries and painstakingly arranged everything for us -- accommodation, transfers and tours. Salamat Sis Tiara!

En Route
We took the earliest Airphil Express flight from Manila to Puerto Princesa and arrived at our destination a little past 7:00 am. At the airport, Charisse'  assistant fetched us and brought us to La Tiara Tours' office where a Lexus van awaits us. Since Charisse' family together with fellow blogger Chyng Reyes and her friend Rem will go with us to El Nido, we have occupied the entire van on ourselves. The van is quite new and spacious. We were seated at the front row so we have enough leg room for the rest of the 6-hour drive.

Halfway, we stopped at the Fort Wally Food Stop in Roxas. It is a simple restaurant that serves ordinary Filipino fare. Prices range from Php 70 up. There are clean but rustic restrooms, too. However, no one is forcing you to eat in the resto. It is not compulsary. You can bring your own food and eat it inside the van while waiting for the other passengers to go back.

Trivia: While outside the food stop I can't help but feel the raging sun. It's too hot! Then our driver said, Roxas is actually the hottest part of Palawan. "There's only two seasons here - hot and very hot," he jokes.

Three hours after our stopover and alas! We arrived in El Nido! The van brought us to Marina Garden Beachfront Inn (www.mgelnido.com) and this was what welcomed us...a sneak preview of paradise! 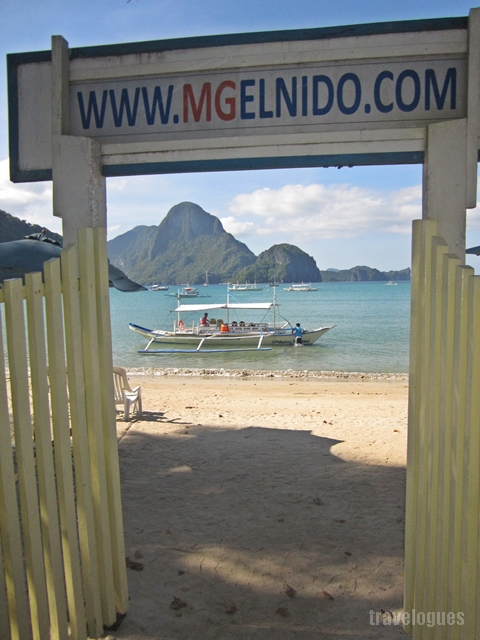 Right after we stepped out of the van, we did not waste any moment to take some photos. Of  course, Charisse, Chyng, Carl and I have a photo together! 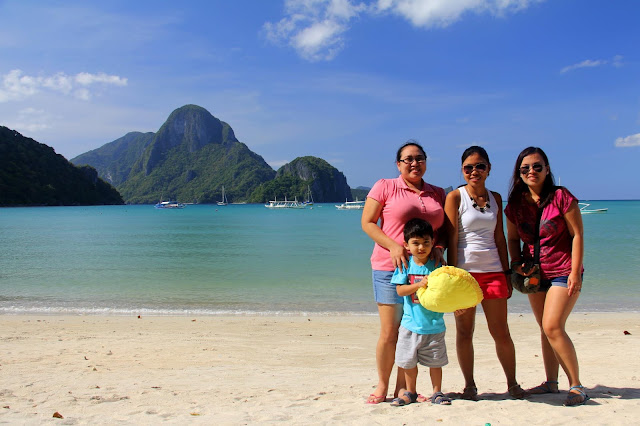 Charisse took care of booking our rooms at Marina Garden Beachfront Inn. She had reserved a Townside Room at the inn's Country Villa. The room has twin beds and two extra mattresses. Maximum occupancy is four pax but I honestly feel that the space is comfortable enough for three pax only. It is air-conditioned and has a private bathroom. We paid Php 2000 per night as the room is on special rate that time. That already includes set breakfast for four pax and free wi-fi.

Tip: Bring your own towel as the towels they provide are kinda thin for my preference. Also, do not go gaga when the electricity turns off in the morning. That's normal in El Nido. Electricity schedule: 2:00 pm to 6:00 am.

For the budget-conscious, there are also native cottages in Marina Garden. Prices start at Php 880.

The beachfront in El Nido is a shorter and more serene version of Boracay, but longer  than Guimaras. You can actually go resto- or inn-hopping if you like. So, if you're like us whose first choice is Marina Garden, when it gets fully-booked, don't fret! There are many inns on the same stretch that are just as good. 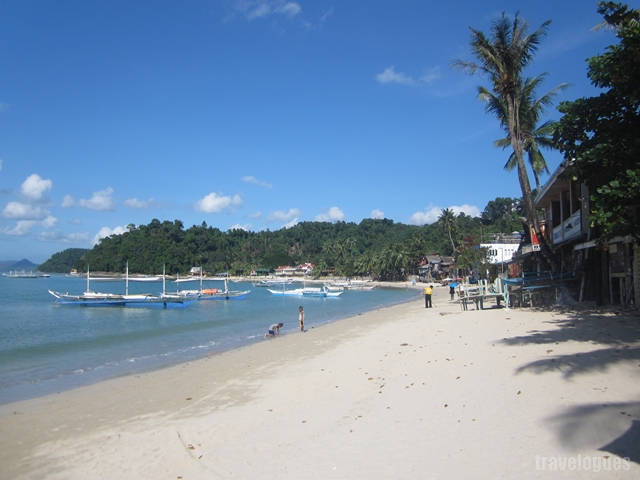 Right beside Marina Garden is OG's Pension which looks just as nice as Marina Garden. It also has a restaurant with flaming torches by the shore at night. Next to OG's is Lally and Abet Beach Hotel (the annex and newer building; the old complex is the one near El Nido Beach Hotel and is comprised of cottages). Next to it is Ricsons, where Charisse and her family slept for the night. 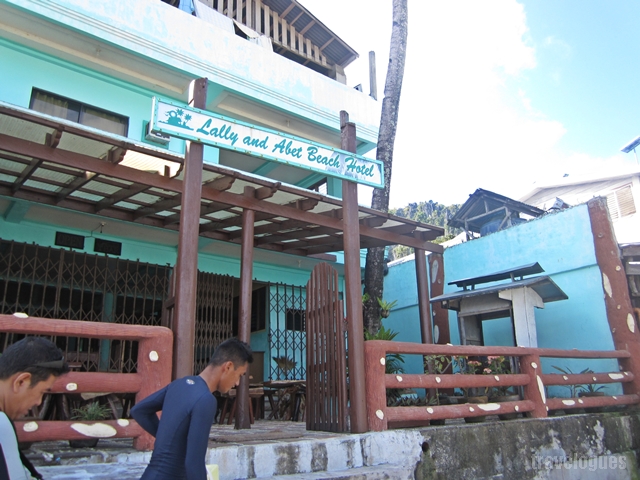 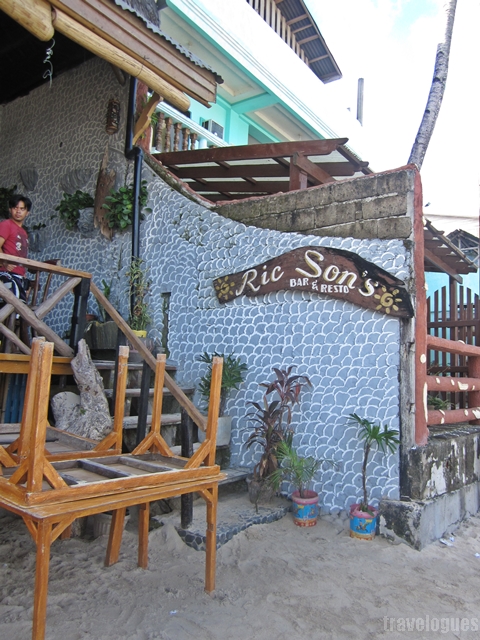 El Nido Series:
How to go and where to stay in El Nido?
El Nido Island Hopping Tour A