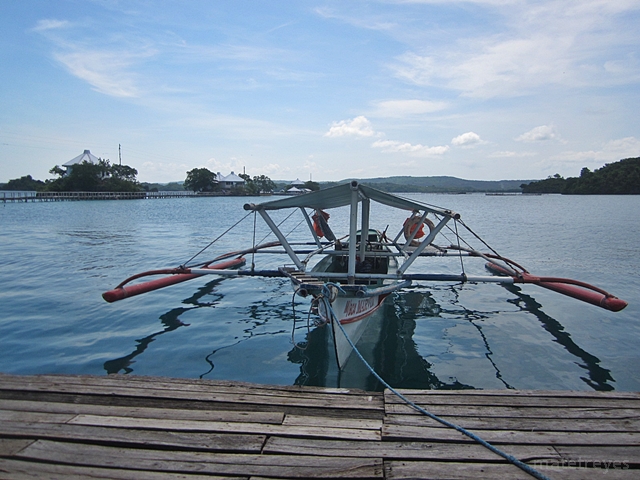 On our second day in Guimaras, we scheduled an island hopping activity through Raymen Beach Resort. This is because Kuya Mai referred his friend who is a boatman there. Apparently, his friend was not there when I went to the island hopping booth, so unfortunately (and yes, you read it right, I was so unhappy), I booked the boat "Marvin".

Why am I not happy? You'll know towards the end of the post.

Our first destination is the SEAFDEC (Southeast Asian Fisheries Development Center). It is a marine research center amidst Panay Gulf, about 10 minutes away from Alubihod Beach. 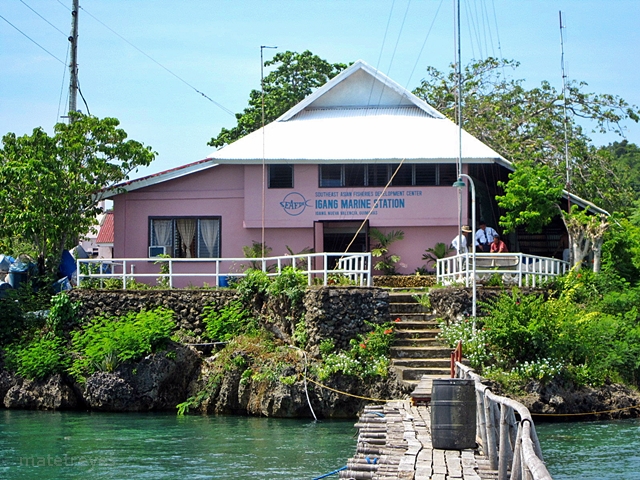 SEAFDEC has bamboo bridges floating on water (think Pambato Reef in Puerto Princesa, Palawan), so you could just imagine how scared  I was when we were crossing across to go to the fish cages. But I conquered my fears (Yey!). I need to see the gargantuan Lapu-lapu (grouper), which, as they said, is the real beast in the deep blue sea. 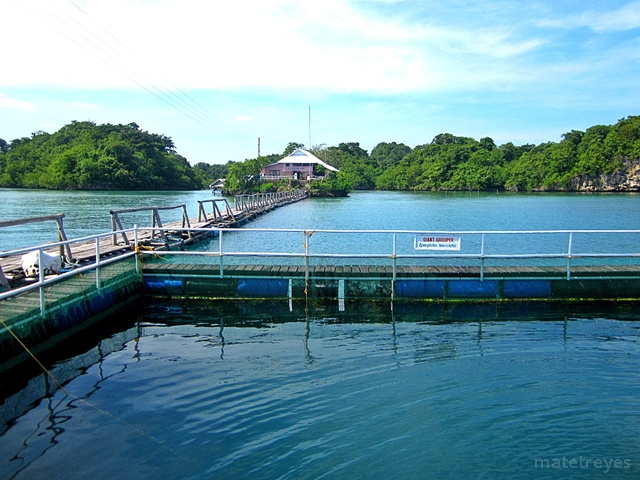 And so we found it! The grouper,  a carnivorous fish, is as big as my 3-year old daughter Akisha. And they have not only one or two, but a lot! Whoaa! The guide said they even grow as big as human beings, and they can really eat humans alive. Scary, huh. 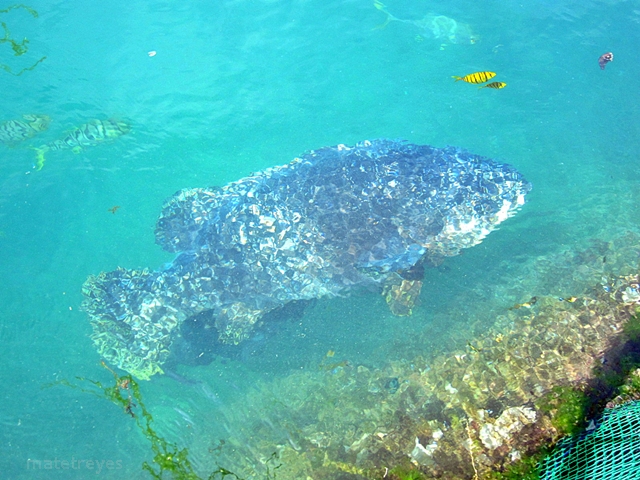 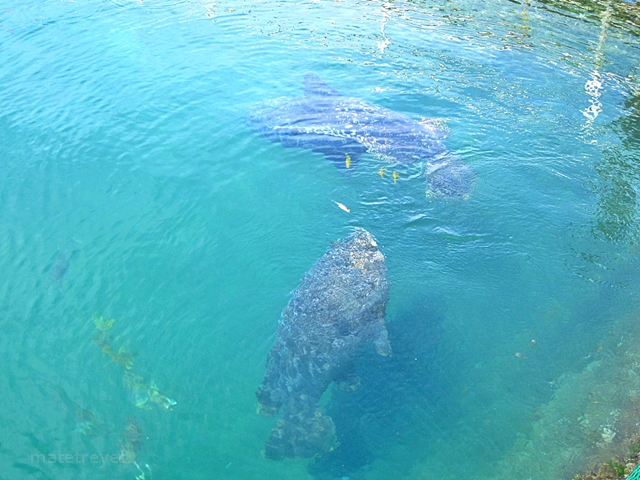 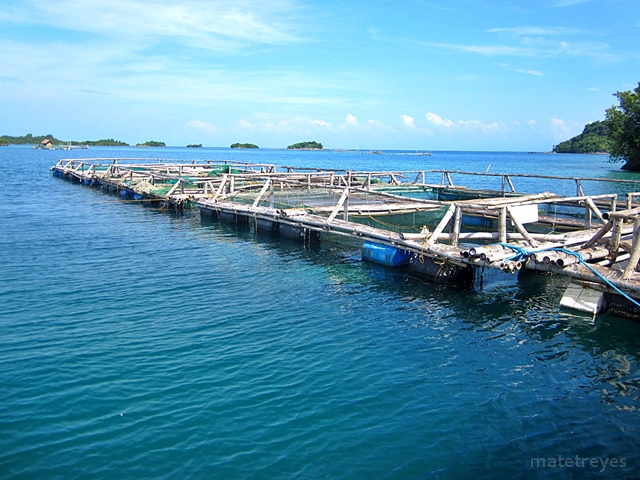 The next fish cage that we had visited contains giant milkfishes. As in GIANT. The guide explained the behavior of these babies including how they reproduce - a very informative stint from the witty guide! 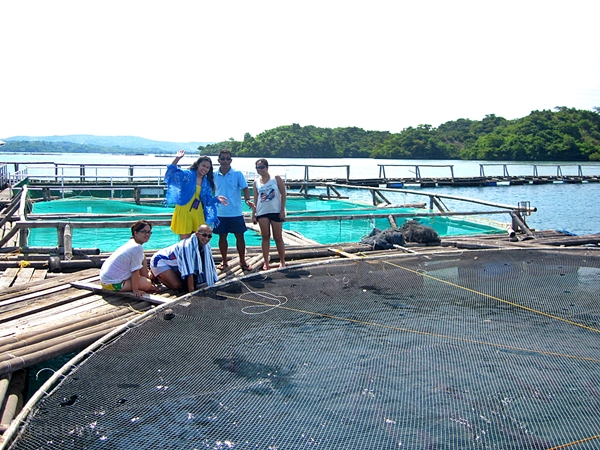 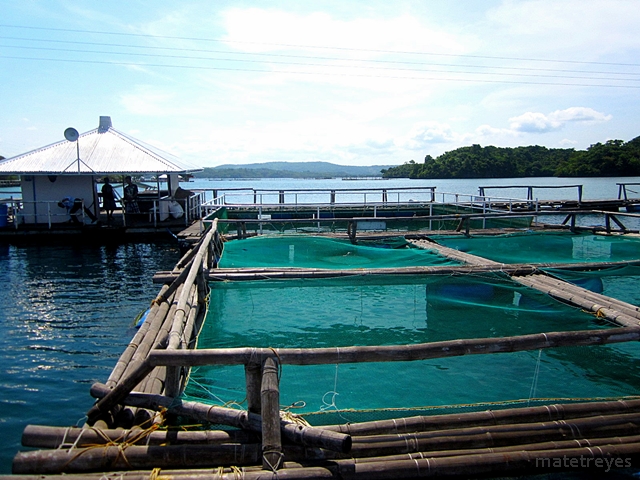 And we also visited the Sea Bass' cage. These, too, are carnivorous! This made me think twice before ordering Sea Bass in fine dining restaurants now. LOL. 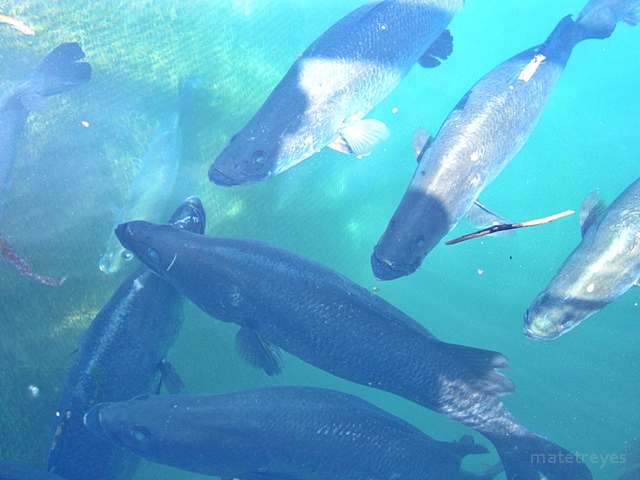 Another attraction at the SEAFDEC is the abalone. The expensive, Chinese cuisine favourite, abalone. It was so fun to hold one, as it tickled our palms. 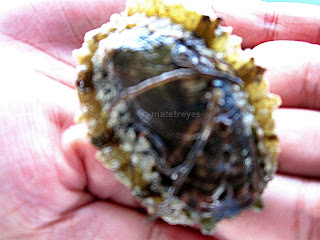 You can also buy some fresh catch at the SEAFDEC that you can bring in one of the islands where you'll be heading next. But we decided not to, as we intend to have lunch back at the resort instead. 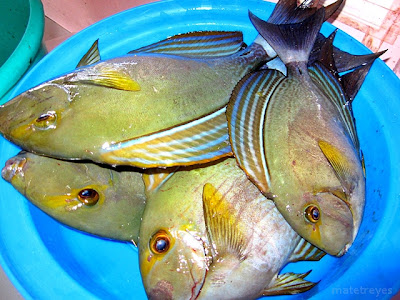 We left the SEAFDEC after about an hour and off we headed to our next stop: Turtle Island. Oh well, we didn't know we're heading to this island until we found the giant turtle on its shores, because our boatman was so lazy to give us info, or rather, too lazy to even talk.

Imagine, we had passed by this beautiful cave and he didn't even bother to tell us what is it. That's how efficient he is. 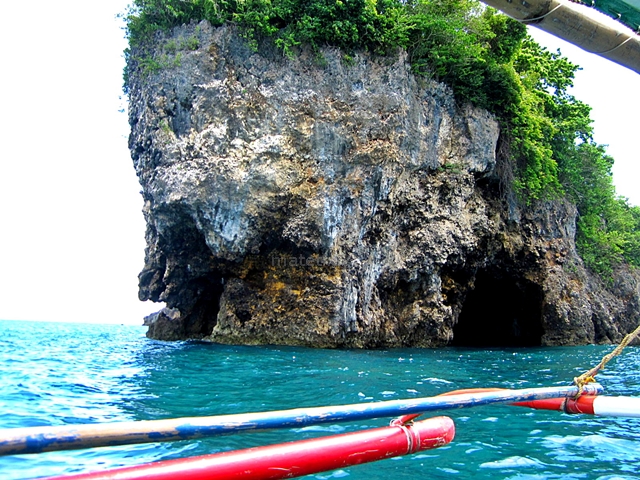 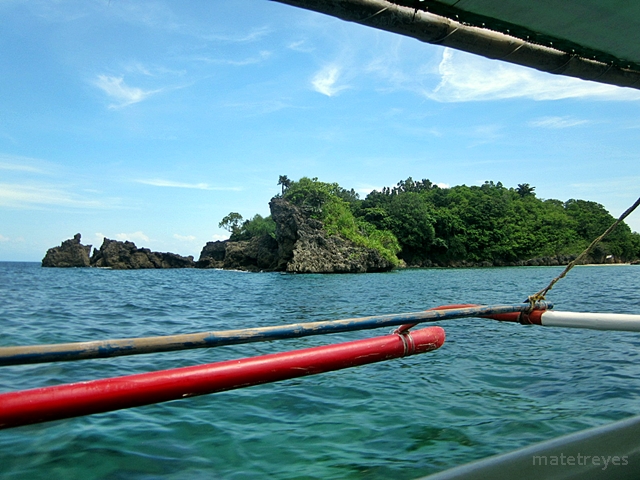 When we docked at the Turtle Island, the only thing that our boatman said was "May cave dun sa kabilang side, pwede n'yong puntahan." (There's a cave on the other side. You can go there.) So we asked how to go there, and if the water is deep. He said it's deep. That's it. He didn't even bother to lend us lifevests, not until we asked for it. And the lifevests look like it won't save you at all. These are the crappy styro wrapped in orange cloth that you put around your neck. Not even  around your body. How unsafe! 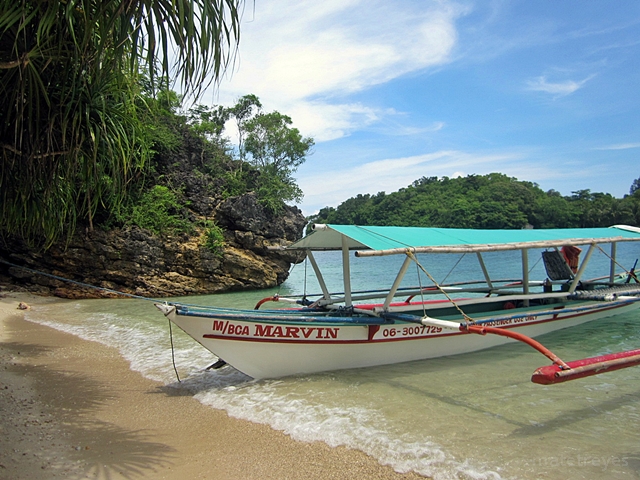 Moving forward, the Turtle Island is a smaller version of Guisi Beach. A bit pebbly. The cave on the other side faces the roaring waves, so make sure to bring a waterproof camera instead. Your usual cameras won't survive here. 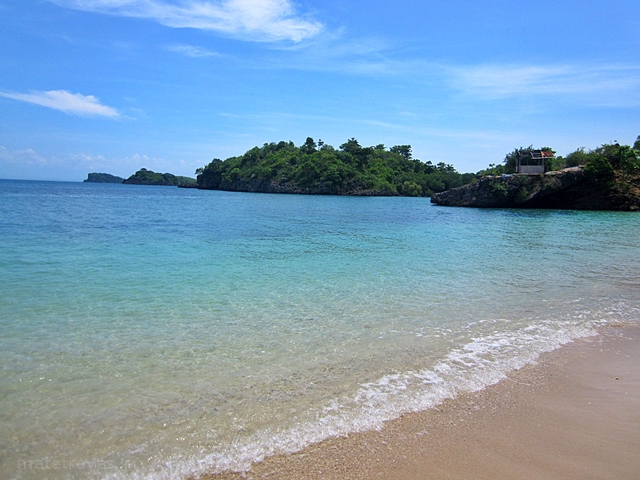 And meet "Pong", the caretaker at the Turtle Island. Now you know why the island is named as such. 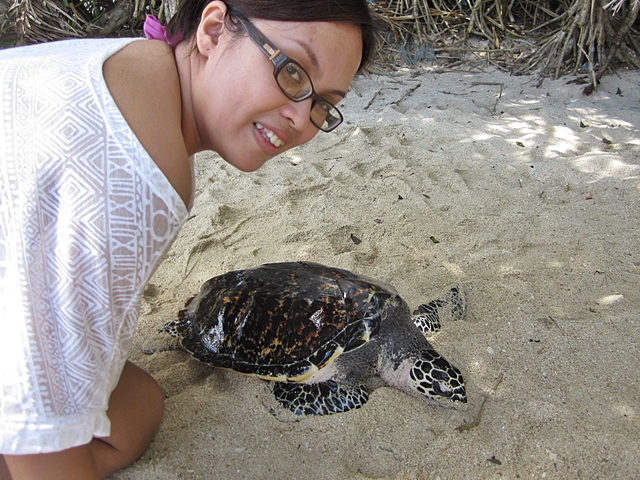 The boatman said we can already swim here. I was really bothered why he kept on saying that we can swim here, when in fact, before we left Raymen, I asked him about our itinerary, and I am certain that he mentioned a bunch of islands - most of which are famous for beach-bumming and swimming.

The answer to my question unfolded when we left the Turtle Island. We passed by Baras Cave and Baras Beach, but we did not dock in there. I thought the boat was just maneuvering around, but apparently, we were just passing by. The boatman had no intent of bringing us closer to the shore.

I let it pass. In my mind I thought, perhaps it is in Natago Island where we will dock longer. 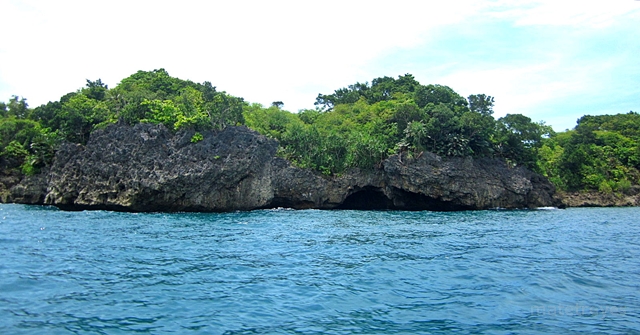 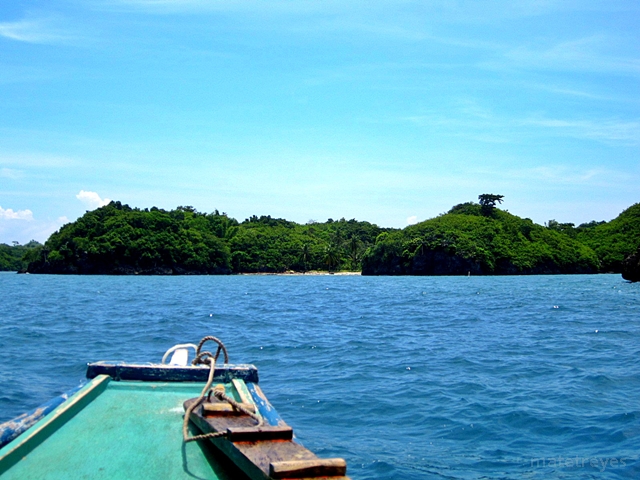 Baras Beach is another famous accommodation in Guimaras, but I won't recommend it. The reason being is that not only it is  hard to reach location-wise, but also it's beachfront is so narrow. The cliff houses also look rustic.

So we passed by Baras Beach and headed to Natago Beach. Guess what? We just passed by Natago Beach. We were not even able to see its shoreline. We were so disappointed. What kind of island hopping it is? This boatman is getting into my nerves. So, the next thing I asked was where are we going to snorkel? He said in Ave Maria. We waited as our boat braved the waves, excited to see Guimaras' marine life. After about 15 minutes or so, we noticed that our boat was already heading home. And we're right, we headed home. No Ave Maria. No snorkeling. I asked the boatman again about it. He said, "Wala naman po kayong snorkel." (You don't have a snorkel (set)). GAWD!!! How would you know? Did you even ask us? Why would you assume? Why would I ask you where to snorkel if I don't have a snorkel with me??? OF COURSE, I HAVE A SNORKEL! I always bring one. This boatman just do not know how to guide tourists properly. I gave up. And then it occurred to me, Oh my, he's from Raymen. The resort I've been ranting about the other day. Oh well, talk about customer service again. So if I were  you, hire a boat not from this booth, but walk outside Alubihod Beach, in between Raymen and Alobijod Cove, and you will see another booth. Or better yet, ask Kuya Mai, or the locals to book for you. Any boat but this "Marvin" boat. 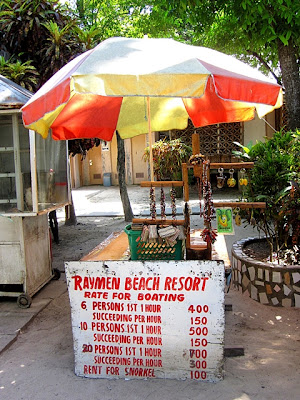 It turned out, we just had a 3-hour island hopping activity and we were back to our resort before lunch. Tsktsk.
Labels: Ave Maria Baras Beach Baras Cave Guimaras Iloilo Island Hopping Natago Beach SEAFDEC Turtle Island