The Dalai Lama said, "once a year, go someplace you've never been before," and I couldn't agree more. How exciting it is to go somewhere new each and every year. More than that, how fulfilling it is to immerse in a different culture; to meet new people along the way; and to delight in the untouched, wonderful gifts of nature. This quote inspired me to travel often and explore the country and its many hidden corners. While others are going gaga over the more popular destinations, I try to find peace in unadulterated islands or coves; in roads less-traveled. This year, one of the destinations I've set foot on was Taytay in Northern Palawan.

Once the capital of Palawan (then called Calamianes during the Spanish times), Taytay played witness to the Philippines' historic past in this side of the archipelago. One of the legendary sites in this town is the Fuerza de Santa Isabel, a military station used to defend against Muslim warriors. Built in 1667 under under the Augustinian Recollect Fathers and named in honor of Spain's Queen Isabela II in the 19th century, this famous relic was completed in 1738. To date, the fort's small chapel and cannons are still intact.

Taytay's seascapes is as rich as its history. Dotted by a number of islands and marine sanctuaries, the town is indeed a diving and snorkeling haven.

How to go to Taytay:
While Taytay has an airport, exclusive commercial flights operated by Island Transvoyager, Inc or ITI (now AirSWIFT) ceased to fly this route. However, the fastest way to get to Taytay is still via a direct flight from Manila to El Nido (also operated by AirSWIFT; semi-exclusive to El Nido Resorts' guests) and from there, take about an hour drive to Taytay. The deep-pocketed may charter a plane, helicopter or seaplane, which will directly bring you to Taytay, or in heli's and seaplane's case, to the island resort of your choice.

Meanwhile, for those who aren't blessed with a deep pocket like me, the cheapest way to go to Taytay is via a flight to Puerto Princesa and about four hours land travel to Taytay. There are regular van shuttles and buses that ply the Puerto Princesa-Taytay route. If you are a group, you might also consider hiring a van so you save more time. You may opt to stay in town or in one of the islands, in which case you would need to arrange for your boat transfers. Most of the island resorts offer regular boat and speed boat transfers.

Where to Stay in Taytay:
While Casa Rosa is arguably the most popular, there are other accommodations available in town. Together with the Team Snorkeling, we stayed at Pems Pension and Restaurant. It's a good choice actually since the family-owned and -managed property lies at the heart of the town, just a few steps away from the Fuerza de Santa Isabel. Compared to Casa Rosa, the rates are cheaper and the location is easier to access since the former is nestled atop a cliff and would require "leg power" going up and down.

Pems Pension and Restaurant is run by Chan Lee Deluna, who shares with us that his family used to be in the furniture business, thus, one would see beautifully crafted wooden furniture all around the property--from the reception to the restaurant and the cozy rooms. There are fan-cooled and air-conditioned rooms, both fairly priced and relatively cheaper than Casa Rosa. Rates of the air-conditioned rooms include a generous serving of plated breakfast.

The single-detached rooms are clean and well-maintained that imbibe a warm ambiance with its lighting and rich-colored furniture. The bathrooms are tiled and tidy, albeit there are no water heaters. Each room has its own veranda that looks out to the charming Fuerza de Santa Isabel. At night, the view is beautiful with glowing lampposts as if reliving the events of its glorious past.

What to do in Taytay:
Visit the Lake Danao
Dubbed as Palawan's largest freshwater lake, Lake Danao (also known as Lake Manguao), this massive body of water spans 660 hectares and provides habitat to 124 different species of birds according to a Western Philippines University research project.

Lake Danao is about 15 minutes away from Taytay town proper. You can hire a motorcycle or van to go here. Please note that the lake may be inaccessible during the rainy season as the path going there may be muddy. The water from the lake also extends broader during this season, and thus, some paths may be impassable.

You can also ride a raft or kayak so you can explore the lake and the three islands within it. This may be arranged at the town's tourism office located at the Fuerza de Santa Isabel.

Explore the Fuerza de Santa Isabel
The historic fortress can give you capsule info about the town's glorious past. Here, there is a small museum that features artifacts that played important roles in Taytay's history. The fortress also has lush gardens and vibrant blooms, as well as a chapel and a park. If you have time, try going here in the morning and in the afternoon towards sunset. Special arrangements can be done if you wish to explore the fortress at night.
Dive or snorkel at the Lopez Reef
When you go island-hopping, make sure that you make a pit-stop at the Lopez Reef.  It may not have the most expansive sandbar but its beauty is well-tucked under its clear waters. While the current might turn you off, I suggest you still give it a try--the corals, the life down under, they look like you just jumped into Dory and Nemo's territory! Wear fins so you can swim your way back to the boat easily.

Stay a night or two at NoaNoa Island, Flower Island, or Apulit Island
If you have the budget and the time to do this, push! We all know that these island resorts come with a hefty price tag, but I am sure the tranquility that you would experience here is priceless. Live like a boss for a moment and just indulge in one guilty pleasure.

The Taytay Bay is dotted with many islands fringed with white sand and rich underwater, so make sure to check them out. For those staying in town, there are regular boats being rented out for island hopping activities. The resort or pension house you are in can also arrange this for you. Trip Republic (www.triprepublic.net) arranges island hopping tours in Taytay.

The usual itinerary for island hopping in Taytay includes a visit to a snorkeling site (Lopez Reef or an alternative), lunch at either Isla Blanca or Dinamayan Island, and spelunking and snorkeling at Elephant or Pabellon Island. After getting amazed at the colorful underwater in Lopez Reef, head off to Isla Blanca, an island that features an expansive white sandbar and a vast coral garden. According to the boatmen, it is an island owned by El Nido Resorts and it is where Apulit Resort (one of El Nido Resorts' properties) usually set-up private lunches or sunset dinners. In case there are in-house guests scheduled to go to Isla Blanca, walk-ins are not allowed to enter the island. We were lucky that no one was there during our visit and so our team was able to explore the island and its marine sanctuary. Our boatmen also cooked our food for us and I must say they were good at it.

Isla Blanca (also called Quimbaludan Island) is a paradise...a haven that will make you succumb to the art of doing nothing. If you are tired of the noise in the city--the nightly partying, the annoying traffic, the hopeless MRT, and a lot more--this is a perfect refuge for you.

At Isla Blanca, only the whispering breeze and the sound of the waves tickle your senses. Add to that, the glistening sand and the crystal clear waters give you that dream vacation you truly deserve. 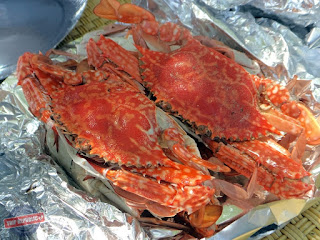 Here are some underwater shots taken from Isla Blanca:


After a scrumptious lunch at Isla Blanca, the next destination on the list was Elephant Island. Also known as Pabellon Island, it features a lagoon, which can be accessed through climbing the rock formations and then jumping into the cold water. If this is not your thing, you can still enjoy the vast coral community surrounding the island. Beware though as we've spotted some jellyfish down under!

The last destination on the list was Dinamayan Island. The boatmen said it is also owned by the owners of Casa Rosa, so guests billeted there can go to this island free-of-charge. However, non-guests are required to pay Php 100/head entrance fee. We begged the caretaker to give us a discount since it was already 4:00 pm and we will only stay on the island for barely 15 minutes just to take photos. He told us we can give whatever amount as "donation". So we gave him, Php 30/head. We were 10 people in the group.

While Dinamayan Island has an expansive shoreline and vibrant underwater teeming with marine life, it still does not beat the allure of Isla Blanca. Given a choice between Isla Blanca and Dinamayan Island, I'll choose Isla Blanca without batting an eyelash. However, if there is an option to check out both, then go ahead!

Below is a compilation of the underwater videos taken from Lopez Reef, Isla Blanca, Elephant Island, and Dinamayan Island:


Taytay may not be one of the most popular destinations in the Philippines, but that's exactly what makes it more interesting. It's mysterious charm makes you want to stay and live the simple and quiet life by the sea. THe glass-like water lures you to dive in and take the plunge. Palawan, for the nth time, you did not disappoint!

offers tours to Taytay.
To learn more our packages,
you may email travel dates and number of persons
at thetriprepublic@gmail.com,
or through mobile at +63998.8644143.