I Left My Heart and Soul in Batanes (Part 3: Exploring the Rest of Sabtang Island)


We woke up early the next morning to explore the rest of Sabtang Island. Despite the power interruption from 12:00 midnight onwards, we were able to sleep well, thanks to the cold breeze that blew nonstop through our windows at the lighthouse homestay. It definitely lulled us to sweet slumber.

Our location does not only command a spectacular view of the Pacific Ocean; it also gave us the advantage of having both sunrise and sunset views. No wonder, there was a group of photographers who went there at sunset, at midnight (to capture a photo of the Milky Way), and at sunrise.

Our guide, Ryan Cardona of BISUMI Tours and Services had already arranged our breakfast ahead, so all we had to do was freshen up and packed our nstuff before headong out for the day. Our breakfast was composed of a sumptuous serving of pork tocino, eggs, rice, and coffee. We had breakfast by the beach (well, by the port actually) and enjoyed the morning sea breeze.

After breakfast, we hopped on a cogon-roofed tricycle again and started the tour of the eastern side of Sabtang Island. We passed by a long and winding coastal road on our way tomour first stop: the Chimantad-Tinyan Viewpoint. Ryan said it's best to go to this spot before the sun becomes too harsh as we would be going up and down the hills. 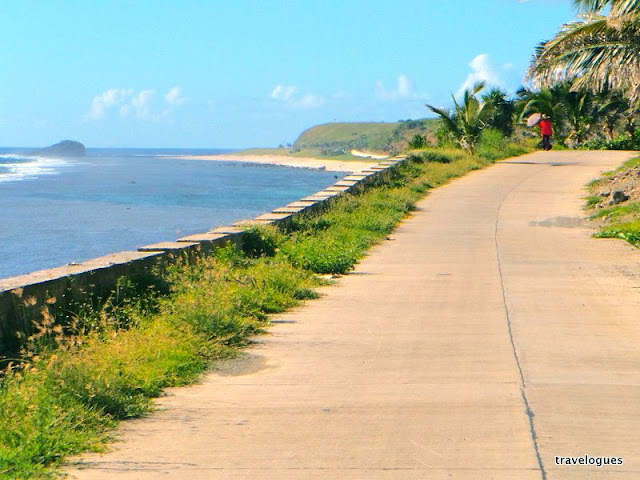 Also along the way, Ryan showed us the Savidug Idjang, one of the ancient Ivatan settlements, which served as a fortress against invaders. They say this one is the most perfectly shaped fortress in the province.

A fantastic view of verdant hills bounded by glistening waters welcomed us at Chamantad-Tinyan Viewpoint. This spot has been a setting to many remarkable movies of which one is the award-winning Dementia starred by no less than the Superstar Nora Aunor.

Going down the expansive hills was effortless as we were so much consumed by stunning vistas. Again and again, it was beautiful everywhere we looked...it was overwhelming. There were coves of white sand and rocks. The were cows roaming around. It was postcard-perfect! So I must say aside from Duvek Bay and Morong Beach, this spot is another favourite. Oh well, I think I like all!


Now, going back to Chamantad-Tinyan Viewpoint's entrance is another story, as we had to walk on an angle, which was quite an effort for those who are not into trekking and hiking like me. Ryan was right--it is really best to do this first while the sun isn't as merciless yet as it is when it's noontime because you may too lazy already, thus, you might dismiss the idea of going down. Such a pity if you do! You're missing a vital part of your Sabtang trip! Glad that we went here first thing in the morning.

Moving forward, we continued on to our next destination: the Chavayan Village. On our way, we saw this lady in vakul (a headgear made of Philippine date palm that is used to protect the Ivatans from rain, wind and sun).

In Chavayan Village, our first stop was at the stonehouse of the Sabtang Weavers Association, where vakuls and talugongs (a headgear for men) are made. According to the lady who was there during our visit, it takes about a month to finish a regular-sized vakul.


The Chavayan Village, with its distinct character, is known to be the cradle of Ivatan culture and heritage. It features rows of old stoneshouses, narrow streets, and a lone chapel that remains roofed with cogon grass.

The chapel is walking distance away from another cove, which features a unique rock formation that resembles two heads kissing each other. On this cove we also met the only remaining man who creates talugong (a men version of the famous Ivatan headgear) the old-fashoned way.


Ryan also showed us the pit where locals process coral stones and limestones that they use in building their houses and other structures.

Just when the sun was starting to be a bit harsh, we left Chavayan and journeyed to our next destination--Savidug Village--another barangay teeming with traditional old houses and the birthplace of the prolific writer and Palanca awardee, Dr. Florentino Hornedo. Being a Thomasian myself, I was so excited to see where the famous professor used to live in Sabtang. To date, the house is already closed and is being watched over by a caretaker.

Coconut crab (birgus latro) also known as robber crab and locally known as tatus, umang or alimangong lupa is one of the highly endangered species listed under the Convention on International Trade of Endangered Species (CITES).The species can only be found in the island province of Batanes and the Calayan Group of Islands in region 02. It is a hermit crab and is known for its ability to crack coconuts with its strong pincers to eat the contents."The species is being protected under Section 97 of the Philippine Fisheries Code of 1998 and Fisheries Administrative Order (FAO) 208. Fishing or taking rare, threatened and endangered species listed in the CITES carries a punishment of 12 to 20 years imprisonment and /or fine of 120 thousand pesos and forfeiture of the catch and cancellation of fishing permit," explained Dr. Evelyn Ame, Chief of the Fisheries Resources Management Division.

So there's clearly a red light in there!

In Savidug you will find the St. Thomas Aquinas Chapel, and beside it, an old beaterio that is also a popular spot for photo ops.

We finished the tour a bit earlier than expected, wo we went back to the lighthouse homestay to freshen up and rest for awhile before we had lunch at the same eatery near the port. The boat going back to Sabtang is scheduled to leave at 1:00 pm, so we still had plenty of time to relax.

Our sumptuous lunch was composed of fish, pork, veggies, and rice. servings were all huge!

At around 1:00 pm, we boarded the faluwa and prepared for another supposedly thrilling ride to Batan Island. Though it was the other way around as the sea was calmer than the day before...again, that was contrary to what I've read on blogs that waves can get rough in the afternoon. Ours was surprisingly calm and not scary at all.

While it was heartbreaking to leave the island of Sabtang, we had no choice but to bid the island farewell. We may be there for just two days but the memories it etched on our minds beckon us to return. Sabtang and Vuhus Islands, you had, indeed, captivated my heart and soul.

Up next: Chasing Sunset at Naidi Hills and Indulging in Authentic Ivatan Dinner, Vunong-style