As part of our family trip in Puerto Princesa in Palawan, I have also booked a tour of the city c/o my dear friend Charisse Sanchez of La Tiara Tours on our first day. We arrived early morning at Big Brother Condotel in Rizal Ave. (see review here) and famished as we were, we headed straight to Jollibee just across the condotel to eat brunch. Our tour would start after lunch so we still had ample time.

At around 12:30 pm, the driver assigned to us fetched us from Jollibee amidst the pouring rain. We were praying really hard that the rain would stop so that our city tour could be more enjoyable. Just like an answered prayer, the rain stopped after less than an hour while we were on the road.

So where did we go? Here are the places we've visited during our  Puerto Princesa city tour:

Built during the American colonization, this penal colony has served as a depository for prisoners who coudln't be accommodated at the Bilibid Prison in Manila. Here, prisoners have the option to choose among vocational activities such as farming, fishing, carpentry and forestry. When we entered the gates of the penal colony, we were mesmerized by the vast greenery that had unfolded right before our eyes. Aptly called "a prison without walls," it looks like a ranch more than a prison.


Our guide said that prisoners here are those who have shown exemplary attitude during their probationary period. As our guide said "being in Iwahig is a privilege, not a choice," meaning not all prisoners who passed the probationary period will automatically qualify to be transferred here. Being transferred here gives the prisoners a sort of "liberation". Why? You will see in the next photos.

Prisoners are trained with various vocational courses. Skills honed here will definitely give them livelihood opportunities once they are released from jail. Whatever they harvest or whatever product they crafted (whether paintings, souvenirs or small keepsakes), they will have a portion of the profit which they can use once they are freed.

You might be shocked as most of the items here are overpriced. It's because, again, profits go to their sort of provident fund that they will get once they leave the prison. So please feel free to help them. A small purchase can make a difference.


If Cebu has a gazillion dancing inmates, here, they have a small group. Might not be as dynamic and spectacular as Cebu's, but it's definitely entertaining. Again, feel free to drop your donations.

Our second stop was the Crocodile Farm. It was our second time here (first time for the whole family) and we could say that nothing much had changed. The line was long, albeit orderly, so we had to wait for awhile.


When it was our turn to get inside, we listened carefully to the tour guide and followed his instructions. First, we went to the hatchery where eggs and baby crocodiles were. Second, we went  to the bigger ones.

If Agusan del Sur used to have "Lolong," Puerto Princesa has "Mac Mac," a saltwater crocodile that now measures about 17 feet long!


Aside from crocodiles in all shapes and sizes, there were also a bear cat, an eagle and a lot of butterflies around the conservation center.

Our third stop was the ranch of the Mitra's (of the Mitra clan fame) located uphill in Sta. Monica, Puerto Princesa. When we went here three years ago, people were still allowed to go until the balcony of the house and have a peek at its interiors. An interesting info that we had learned during our first trip was that the house has one central post only, which holds the rest of the house altogether.


The ranch serves as a view deck that commands a spectacular vista of Honda Bay. The sea breeze blew calmly onto our faces as we look at what seems to be an endless view of the sea.

Another thing I noticed was that there's a zipline now from the lawns of Mitra's ranch . I have no idea how long is it but  it will definitely give you a nice view of the hills and the bay.

A trip to Puerto Princesa is not complete without checking out the famous "Baker's Hill." It was our second to the last stop before we go back to the city proper.

Aside from freshly-baked goodies like the famous hopia (pineapple and ube are my favorites), crinkles, and many more, Baker's Hill also has hectares of beautifully landscaped gardens filled with verdant greens and vibrant blooms.

Baker's Hill is also a good stopover for quick snacks. Most of the standard tours do Baker's Hill in the afternoon in time for merienda. Before, only the bakeshop offered quick bites, but now, they had put various food stations around the property. There's pizza, banh mi, tamilok, fruit shakes, and a lot more.

And if you happen to crave for some heavy meal, you can indulge in their seafood paluto. Of course, you can do this if you're solo or doing DIY tours, because if you are on a joining-tour, you have to think of your tour-mates, too!

If paluto is not yet enough for you and you still want to indulge on seafood more, then better to go to Baker"s Hill on a Sunday as they have a Seafood Lunch Buffet at a very affordable price.

The  place is also perfect for kids as it has cartoon character figures, animals, and playgrounds all over.


There was also a small view deck which gives a bird's eye view of the neighborhood. 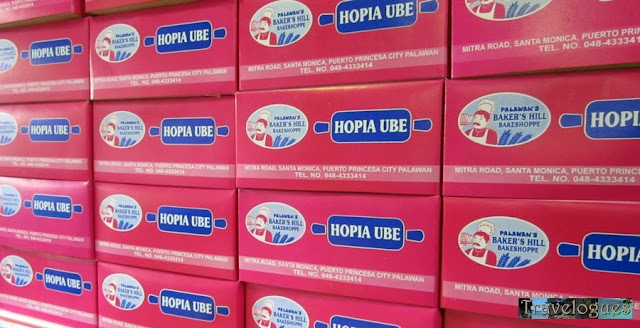 Going back to the city proper, our driver brought us to Plaza Cuartel. We arrived there before sunset (we were supposed to go to the boardwalk and the church near Plaza Cuartel but it was getting dark already). 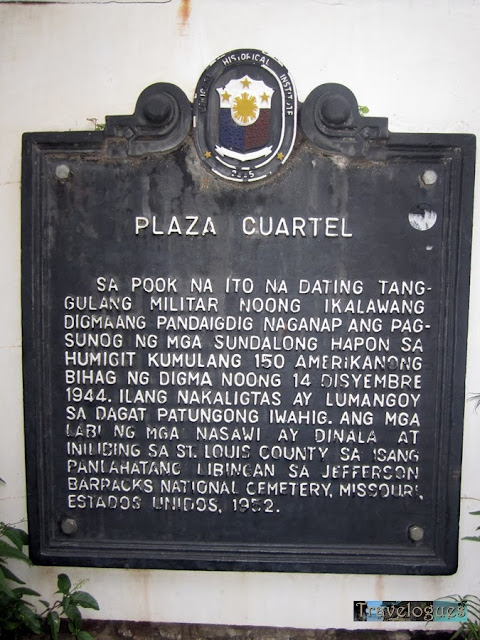 Contrary to the good and positive vibes at the other tourist spots in Puerto Princesa, Plaza Cuartel has a mix of nostalgic and creepy aura. Just knowing that a lot of soldiers were burned to death here during the World War II gives us goosebumps all over.
We actually had some photos taken inside the cuartel that have orbs all over the place (creepy mode!).

Our last stop was the souvenir shop named Mercado de San Miguel. In Puerto Princesa, never leave the city without bringing home some cashew nuts (I personally like the plain, unsalted ones), rainmaker, personalized T-Shirts (not the generic ones) and of course, pearls! Palawan is known for reasonably priced South Sea as well as freshwater pearls. There are also accessories made of semi precious stones like coral, turquoise, onyx and jade that are cheaper than mall price.

At the second floor os Mercado de San Miguel is Centris Inn, a boutique accommodation that is also affordable. It's location is obviously one of the best as it is literally just a few steps away from restaurants and shopping areas.

That concludes our Puerto Princesa trip for the whole family. Next time, I will definitely explore the Sabang area (a long overdue wishlist).