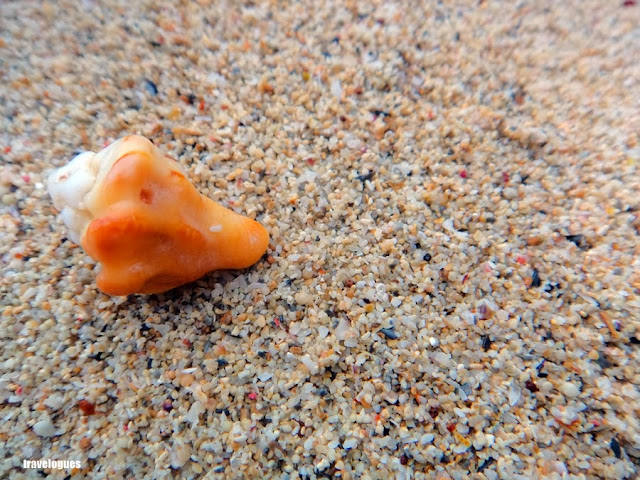 September 20, 5:00 am, I was awaken by a text message from Toni who was housed at room number 1. The text says "Mahangin pa din!" (It's windy still). And from that point, I couldn't sleep anymore. I could hear the gust of wind blowing stronger than the night before. The rain hasn't stopped and in fact became wilder. Oh no, this couldn't be. It has to stop or else our island hopping activities would be postponed. Sad.

At around 6:30 am, we went down to the cafeteria and waited for our pre-ordered breakfast. We told Lemuel, the cook, that we would have breakfast early as we plan to start our island hopping activities at 7:00 am. When we arrived at the cafeteria, he was already preparing our breakfast -- mine was porkchop, egg and garlic rice, while hubby's was daing (dried fish), egg, garlic rice and salted egg and tomato side dish.

While eating breakfast, we could still feel the wind. It's becoming hopeless at this point. Even the inn's owner, Francis, said the coast guard might not allow us to sail because it would be too dangerous. We were all praying hard that the wind and rain would stop.

We spent the entire morning surfing the net as WiFi at Picardal Lodge was complimentary and the signal was at an amazing speed. Facebook, Candy Crush, Twitter, name it. We even searched for the weirdest stuff on Google just to kill boredom.

Before lunch, Uly went to the market again to buy something to cook for lunch. He decided to cook sinigang (pork in sour sour broth). We had lunch earlier than usual and at the time we finished eating, we asked Francis again if it's still impossible to pursue island hopping. He then called the boat captain, Kuya Loklok, to check if we could already go even just to Bigaho Falls. Kuya Loklok then confirmed that we could indeed start island hopping and that in fact we could go to Exotic and German Islands, too. We got excited, dressed up and packed our things immediately.

From Picardal Lodge, we walked to the port located just beside the public market and looked for Kuya Loklok. As if on cue, the wind started to blow again and we were starting to think of backing out. But we're there already and there's no turning back. We boarded Kuya Loklok's boat nonetheless.

We were 10 pax plus three boatmen aboard a boat that could probably fit two pax more with its size. The boatmen handed life vests to us only to find out that the boat has seven vests only, some were in a not so good condition. We couldn't do anything about it anymore as we had already started sailing the Imuruan Bay facing the West Philippine Sea.

The waves started to become wild five minutes after we had left the port. We thought it was only on that part of the bay, but we were wrong. The sea was getting rougher and rougher as we sail, and the wind had become stronger again. The skies turned gray...darker and darker as we continued to sail. We couldn't see the nearby islands and the mainland at this point. Everyone on the boat was silent, perhaps praying and humming praise songs in mind. Water splashed onto us as we attempt to brave the angry waves. I couldn't breathe normally anymore. I just prayed and prayed. And worst, our boat's engine stopped for a few seconds amidst the roaring waves. Fortunately, the engine started again, and we continued cruising the sea. Approaching Tandan Island, our boatmen parked the boat nearby and told  us that they were just refilling fuel. At this point we started voicing out our fears and asked the boatmen if it's still safe to continue cruising, should we go back, or should we just stay at Tandan Island and let the rain and the wind stop. Kuya Loklok, as if not listening to us had started the engine and said he'd bring us to a nice beach. We started to get a bit hysterical, and one of our friends brought up that one of the boat's outriggers was already broken. As we spoke, another one broke down. There, we all decided to anchor the boat at Tandan Island.


As soon as we disembarked the dilapidated boat, we looked for a spot where we could stay dry and warm. We were all wet and the rain and wind wouldn't stop! I got my phone from my friend's dry bag immediately and thank god, there was signal! I called Francis right away and told him what happened and requested that he ask for coast guard's help to rescue us. Thumbs up for Francis for being on top of the situation and really making sure we were okay!


While waiting for the rescue team, Kuya Loklok and his team were trying to fix the broken outriggers and was telling us that we could go back altogether to the mainland after they finish the repair. We didn't like the idea anymore as we were still enveloped in trauma. We said we'll just wait for the coast guards.


Just in front of Tandan Island is a camping site owned by a Canadian married to a Filipina called Thelma and Toby's Island Camping Adventure. It looks promising actually.

After about less than an hour, the rescue team's speedboat arrived at Tandan Island. We felt a sigh of relief. We wouldn't spend the night at the island! Yey!

The rescue team was so prompt. As soon as they docked, we hopped on the speedboat trying to fit our voluptuous bodies inside. The guys who rescued us said they were about to rescue another group that was stranded on a far island for three days, but their head instructed them to rescue us first since we were nearer the mainland. God knows how happy we were when we were rescued first!
From Tandan Island to the mainland via speedboat, it took us only about 30 minutes, while it took us almost an hour on the outrigger boat. I guess if it wasn't that windy, we could have sailed faster and safer. But then, that wasn't the case. So lesson learned, do not attempt to go island hopping when there's a storm even if the boatman says it's ok. And, go to San Vicente during the amihan (northeast monsoon) and summer months.


So, our island hopping activities which was supposed to bring us to Exotic and German Islands, as well as Bigaho Falls, didn't happen unfortunately. No swimming. No basking in the sun. No snorkeling.  Sad. We just hoped that the sun would rise the next day... =(