San Vicente in Palawan is home to the longest beach in the Philippines, as well as several pristine, untouched islands like Daplac, Exotic and German Islands. We've been dreaming of going here for the past months and  just last week, we thought it was dream come true...until...

September 18, Wednesday, one of my friends was supposed to fly to Puerto Princesa a day ahead of us. She was early at the airport, with e-boarding pass on-hand only to find out that she had booked the wrong flight (instead of MLA-PPS, it was PPS-MLA; same with her return ticket which was MLA-PPS). She called me right away and we tried to find her a new ticket. Wheewww! What a start! =)

Later that same day, some of my friends started to back out (unapproved leaves, etc. etc.) It was sad because we won't be complete for this much-awaited trip. Before the day ended, we were able to get a ticket for my friend who had the wrong booking.

September 19, Thrusday, the start of our journey. We convened at the NAIA Terminal 3, boarded the plane only to find out that one of our friends did not make it. Sad again. It was as if we were on "The Weakest Link."

It was sunny in Manila, and we landed safely at the Puerto Princesa airport a bit delayed. it was sunny there, too! We met Charisse, my friend from La Tiara Tours who took care of our van arrangements. Since we were a big group (originally 13 pax but went down to 10), we decided to rent a van instead of taking the public van shuttles at the San Jose Terminal. But for those who wish to commute, you may check out Lakas ng Trip blog for detailed instructions on how to go to San Vicente, Palawan.

Since we were only 10 in the group, and the van was spacious enough to fit in 14 people, our trip was comfortable leaving more legroom for us. Our trip was smooth and fast, with Kuya Ramil, our driver who is also from San Vicente, at the helm.

There are two routes to San Vicente: the shorter yet muddier Itabiak Road, and the longer Alimanguan Road. Kuya Ramil chose the former.

We passed by long and winding concrete roads as if we were gearing towards Baguio City. Some spots were steep and scary, but it was generally safe. Until we arrived at the first challenge of the day: crossing the muddy parts of Itabiak Road. And when I say muddy, i mean it! We were stuck for awhile and Kuya Ramil went down the van to check the road if we can still go through. He had also asked the assistance of the construction workers onsite and luckily, one of them agreed to flatten the muddy road with a grader. Lesson number one: it pays to have a local driver who could ask help around his territory, hehe. Good job Kuya Ramil!


So after some muddy and rocky road adventures, we finally arrived at Picardal Lodge, our home for four days in San Vicente. The trip lasted for about 4 hours.

Picardal Lodge is a quaint family-owned inn right in front of the San Vicente Public Market. The owner, Francis Picardal, is one of the most helpful and accommodating hosts I've ever encountered. From my inquiries over Facebook to onsite assistance, he never failed to be of service. He welcomed us at the inn's cafeteria and directed us to our respective rooms. We were also lucky to have booked way, way ahead and availed of the old rates exclusive of breakfast. The new rates are as follows: 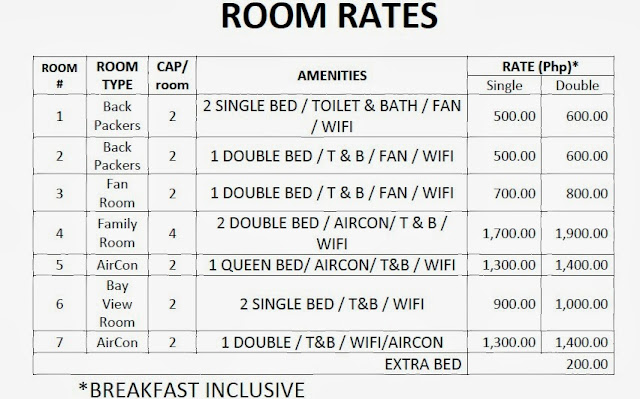 The inn has seven rooms made of local, indigenous materials. Rooms are perched on a hillside, so expect to climb up the stairs if your room is at 5, 6, and 7. Exercise! Each room has a veranda with a view of the verdant trees or the sea.

Our room was number 7, located at the end of the corridor. Guests have the option to use the aircon or not. Price will be less if guests will not turn on the aircon. We decided  to use the fan because it wasn't too hot when we were there. In fact, it was raining. There, another unfortunate event -- there was Typhoon Odette at the northern side of the country, intensifying the monsoon winds and rains in San Vicente. And it was freakin' sunny in Puerto Princesa when we arrived!

Our room was clean and spacious that it could fit up to four pax with extra beds. The bathroom was also clean and water pressure was in full force. The inn has its own water tank so water supply isn't a problem. Likewise, it has its own generator that they turn on at 12:00 mn when the power shuts down. Power resumes at 8:00 am.

From our veranda, we could already see the sea and the public market.

Picardal Lodge also serves meals at an  affordable rate of Php 80/pax. Lemuel, the in-house cook was also one of the most accommodating and witty staff of Picardal. If you happen to have food that you want to reheat, they will be happy to share their kitchen with you. It really feels like home.

After settling down, we went straight to the public market to eat. We ate at Adam's Canteen (meals at Php 60) but we were not so happy with the food so I decided not to post it here anyway. The public market was small but goods are priced fairly. It's not a tourist-y market yet. =)

We decided to go to the long beach after eating lunch. Our driver, Kuya Ramil went home to his house and went back to the inn to fetch us. San Vicente's 14-km long beach is the longest in the Philippines, stretching from Barangays New Agutaya, San Isidro and Alimanguan with islets in between. Barangay New Agutaya was about 15 minutes away by car from Picardal Lodge, and it is the nearest point of the long beach from Poblacion.

It is indeed a long stretch of fine sand in there. Fine as in "Calaguas" fine, but not as white. The sand was cream/beige but it was super soft on the feet. You don't need your aqua shoes shoes here. Better to walk barefoot!

Francis' friend, Boyet, has a private beachfront property at the long beach so he accompanied us and introduced us to the owner. On our way, Francis pointed at the Discovery group's property as well as the Webb's. No entrance fees at the long beach yet but in no time, resorts are going to sprout here fast as celebrities like Derek Ramsey and KC Concepcion, and other resort chains were rumored to have bought properties here.

Since it was gloomy and it felt like it was going to rain again, we left the long beach before sunset (well, there's no sun to set, hehe) and headed back to the inn.

Our assigned chef for the day, Uly, went to the market to scout for something to cook for dinner. At the market, he found some fresh fish and he decided to cook it sweet and sour style. Francis was so gracious to let Uly use their wood-fired stove.


We had dinner while recapping the day that was. It was still raining and the wind was bustling harder. Francis advised us that if the winds would retain its strength, our island hopping activities the next day might be canceled. There again, we couldn't do anything but pray...harder.