A sunset cruise was included in our itinerary on our last day in Misibis Bay Resort and Casino. We were looking forward to this activity as it will be our first time to cruise on Albay Gulf and the Sula Channel. Also, the word "sunset" made us more excited. If you have been following me on Facebook, you might have noticed how hubby and I love taking photos of the sunset. It just amazes us. Its warm colours and the beautiful silhouette it creates give us a different high.

But, unfortunately, the weather did not cooperate. It was gloomy the whole time, and no signs of sunset anywhere (even the Mayon volcano played hide and seek with us). We were almost convinced to do the cruise early the following day after the ATV tour to the hilltop and before we leave the resort, until a couple in their 60s who were also guests of the resort invited us to just join their cruise that same afternoon. The two were so kind and accommodating that we didn't think twice and joined them.

We cruise on Albay Gulf despite the gloomy weather. The water was calm, nevertheless, but the wind blew as if we were on top of a mountain. Onboard the speedboat was some cracklings and a few bottles of water for all of us. The guide then introduced himself and gave us a quick introduction about the cruise.

Our first stop was the Sula Channel, where the newly-built Sula Bridge now connects Cagraray Island to mainland Albay. In 2008, the bridge wasn't there yet, so guests of Misibis Bay (then called Discovery Bay Misibis) had to ride a barge to cross the water. When the resort opened and the bridge wasn't finished yet, they used to provide boat transfers from the mainland. The bridge made crossing the Sula Channel easier and faster.

The guide said Sula Channel is one of the safest bodies of water in the  Bicol Region, so this is where boats and ships hide when the weather gets moody. True enough, the water here is calm and the wind is not that strong.

Along the way, we saw a passenger boat bound to Rapu-Rapu Island (one of the islands comprising the municipality of Rapu-Rapu; the other being Batan Island). The guide there are also beaches there but are still undeveloped.

The picturesque Albay Gulf is dotted with limestone rock formations similar to Palawan. Honestly, I didn't expect this tour to be as scenic as this, but it turned out there were a lot to see around Misibis. We didn't go island hopping, as there are no island/beaches there, but the many limestone karsts alone made the trip worth a try.
We stopped in front of some of the rock formations to take some photos. We actually wanted to snorkel (yes, again!) but the current near the rocks is a bit strong, so our boat captain won't allow us. Please, they said sea snakes are all over the place, so forget it.


There's a small cave-like opening where the water crashes big time, so we were talking about it as the next Underground River in a few thousands years time.

On our way back, we saw a small private beach with colorful flags on it. The beachfront is short but beige-white nonetheless.

And just across the private beach cove,  we saw the hilltop where the chapel and the eco park are located.

We saw a lone fisherman trying to catch some fish despite the unpredictable weather. 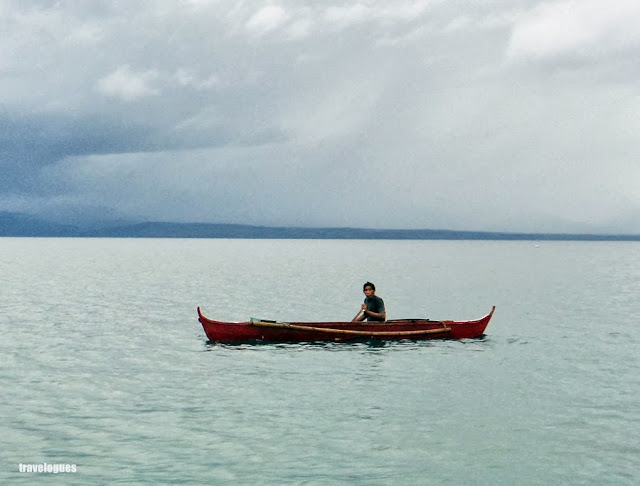 Our cruise went well despite the absence of sunset and the views of the Mayon volcano. It was such a great experience to explore the gulf and see its natural, unspoilt beauty. Indeed, Misibis Bay is not just about the resort; it's the natural beauty of its location that gives this gem a striking lustre. So, when you visit Misibis Bay, take time to go out of the resort and explore nature's wonders around it. Believe me, it's worth it.