WHAT TO DO IN SURIGAO CITY

After a sumptuous lunch at Almont Beach Resort, we asked the front desk to help us hire a tricycle that would tour us around the city. The receptionist was able to get a tricycle for us at Php 200, covering Punta Bilar, Looc and Mabua. But for those who want a more comfortable, airconditioned transportation service, there are vans that you can rent out for as low as Php 1,200. If you're many in the group, might as well get this offer. Since we were only three in the group, renting a tricycle is more practical for us. 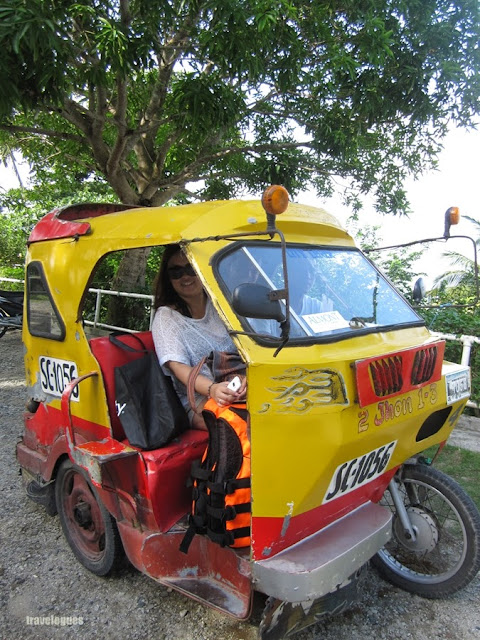 Me at Herbert's tricycle

There are tricycles that are accredited by Almont Beach Resort. Getting their service is safer and more convenient that trying to haggle from the locals yourselves. Our driver was Herbert, a relative of someone who works at Almont Beach Resort. I don't have his number, but just in case you are interested, you may get in touch with the resort's manager,  Mr. Edgar Cervantes at  fo.beachresort@almont.com.ph. You may also reach him through 09228599403.

When we left the resort, we told Herbert that we would like to go snorkeling at Punta Bilar. I read about it on the net and learned that there is a marine sanctuary just 10 minutes away from Almont Beach Resort. Little did we know that Punta Bilar is actually the name of the baranggay, and that there were two attractions there: the lighthouse and the marine sanctuary.

On our way to Punta Bilar, I already saw a familiar boardwalk that has a signboard that says "No Fish Feeding". I was certain that that was the way to the marine sanctuary as I also saw a dive shop (Punta Bilar Dive Shop owned by Jake Miranda who initially informed me that the dive shop was closed for the week but the marine sanctuary was open for snorkelers). But when I asked Herbert where the marine sanctuary is (I even told him that we want to see the corals and fishes, and that was the reason why we had brought lifevests, fins, snorkels and masks). He said that Punta Bilar is up there, but the road is still under construction so we need to park the tricycle at the foot of the hill and hike our way up to Punta Bilar. And so we thought there is a marine sanctuary at the other end of the hill. Lo and behold, we followed him, parked our tricycle, brought our aqua gears and started to walk up.

We were already feeling exhausted until we saw a concrete road. What a relief! It was so hard to hike up the rocky, steep road on a hot sunny afternoon. Imagine, that was at 3:00 pm! Hello UVA and UVB rays! But then, we still couldn't figure out where the marine sanctuary Herbert was talking about. We were already having a feeling that there was a miscommunication, so when we saw the lighthouse, we asked Herbert again where are we going to snorkel. This time, my friend, who knows how to speak a bit of their dialect had  tried to explain what we were looking for. Surprisingly, Herbert said he thought we were looking for the lighthouse in Punta  Bilar!!! Labo. We got frustrated but then we thought, the confusion might be due to language barrier. So for that, we forgive you, Herbert! Peace!

The long hike to this lighthouse was worth it. The view was stunning -- verdant rolling hills bordered by the calm sea! Picture perfect, indeed.

After taking photos of the lighthouse and the hills, Herbert suggested that instead of going back to where the tricycle was, we can just go straight ahead towards Looc where the view deck is located. He said it was just a few meters away, so we agreed.

Well, it wasn't that near, hehe. It seemed like the path was endless. Until we saw a pebbly beach with beautiful rock formations. There, we felt reinvigorated. The water was subtly caressing the pebbles and rocks of all shapes and sizes.

Then Herbert told us that there is a stairway to the view deck near the cottages at Looc pebble beach. When we saw the concrete stairway, we almost felt frustrated as we would need to climb up again. My legs were trembling already, and it seemed that I already lost tons of pounds from walking up and down the hill from Punta Bilar.
But when we finally made  it to the top, we were all awestruck by the view of another famous pebble beach in Mabua. The cove looks spectacular!

We stayed at the view deck for a few minutes to hydrate ourselves and have some rest. Our legs were so tired that no one would dare stand up for awhile. And when we finally decided to go down towards Mabua, we were certain that we wanted one thing: have a dip at the beach!

Mabua pebble beach, as the name  implies, is a cove with pebbles of all shapes and sizes instead of powdery sand. It's so unique that I couldn't think of another beach like this in the Philippines.

When we had a dip at the beach, the waves started to get stronger so we were bombarded by huge smooth pebbles!!! We tried snorkeling but we couldn't see a thing but pebbles. Giant pebbles.

We spent a few minutes swimming and braving the roaring waters of Mabua pebble beach when we finally realized that the sun was starting to set already. Sunsets at Mabua pebble beach are fantastic, although,. don't expect it to be as vivid as the one you would usually witness in Siquijor, Palawan, or Boracay. For some reasons, the sunset here was just yellow and gray. No vibrant orange!

When we finished taking photos of the sunset, we called Herbert and told him to bring us back to the resort. By this time, we were dead tired already.

By the way, if you want  to buy pasalubong, just hail a tricycle to the city proper and you will see a pasalubong center  beside the Tourism Office, and another one a few meters from it. The one at the Tourism office was closed when we went there, so we were able to buy some stuff at Lovely Pasalubong and Souvenir Shop. The prices though are a bit touristy. =) 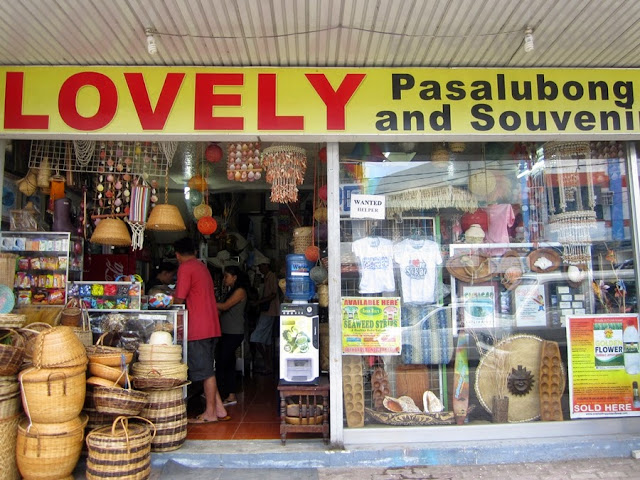 What to buy? There were ref magnets, trinkets, accessories, crispy squid, tablea, etc. Our favorite is the thin coconut biscuits. 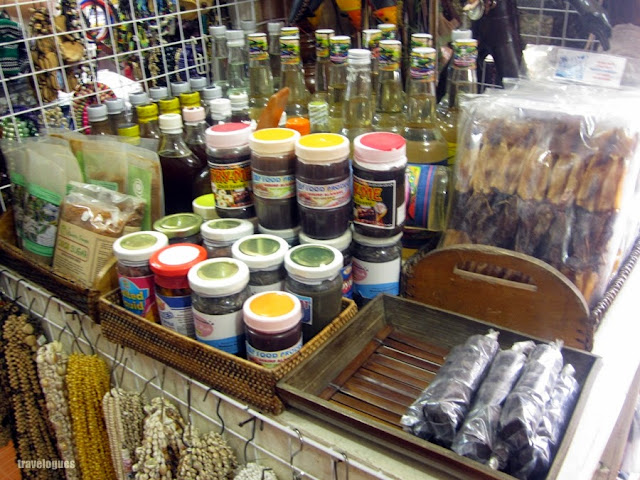 Up next, our Siargao adventure!