I was able to try both numbers 1 and 2. Last year, we took the Puerto Princesa route and endured the six-hour long and winding ride to El Nido. The journey was generally fine with the comfortable Lexus shuttle van which my friend Charisse of La TiaraTours had arranged for us. On my second time in El Nido, we took the direct ITI flight which obviously is the most convenient, albeit expensive mode of transportation to Northern Palawan. It might rip off your pockets, but the direct flight will definitely save you time and give you an awe-inspiring impression of the destination. Let me tell you why.


It starts from the little airport at the A. Soriano hangar, where two luxury resort companies share the pre-departure area: Amanpulo and El Nido Resorts. Yes, you don't have to go through long lines  at any of the infamous NAIA terminals 1 to 3. And a porter welcomes you as soon as you step foot on the hangar's door. Your luggage will be scanned and the zippers will be sealed with a special sticker that's marked "checked". This sticker will also ensure that no one will ever open your luggage except you, as the sticker is not easy to peel off!

While waiting for your check-in time (if you happen to come early), you can indulge in yummy muffins and danish at the lounge. There's also free flowing coffee, juice, iced tea and water for all the guests to enjoy. I heart the danish. Trust me, it's to die for.


Ok, don't fret at the sight of this small plane. This isn't the one that flies to El Nido, as ITI replaced their aircrafts with ATRs just recently. No more 19-seater planes. So it just feels like you are bound to Boracay or Naga.


At check-in, you will be given a baggage claim stub and a cute wooden boarding pass. I know you would want to keep it as a souvenir, but you could only do so if you pay the fine of Php 750 and keep it as if it was lost! Haha! Be warned though that the next time you'll see your baggage after checkin is at your room at the resort already. So get everything that you need from your check-in baggage!


Boarding is swift and organized, and taking off is smooth and not scary at all. Another thing I like about this direct flight is the picturesque views you'll be able to see while onboard. We passed above Busuanga and saw these islands. I guess the one at the photo above is Two Seasons Coron as it resembles the same shape as depicted in their maps and brochures.


And we passed above San Vicente, Palawan's long beach, too! It's as if we were on an aerial ocular of Palawan. How cool is that!


The flight took us less than an hour to Lio Airport in El Nido. We were welcomed by a group of locals singing harmoniously in their native tongues.

At the airport, a representative approached us and gave us a short intro about the resort where we were about to stay for three days. Refreshments were served again. And with that I meant local rice cakes, and bottomless iced tea, coffee, and water. After a few minutes, the representative assigned to us directed us to an air-conditioned jeepney that would lead us to the wharf where our deluxe boat was waiting.

On our flight back to Manila, I especially requested for a seat at the Alpha row to make sure I'd have the best views while taking off. (Note: From Manila, get a Delta seat away from the plane's wings to get the best views of Palawan). And as expected, I was able to capture the beauty of El Nido from above the skies!

My only mistake is that I forgot to take a video while taking off. I know it's prohibited but who could resist such an awe-inspiring view! I even spotted some white coves and pocket beaches. 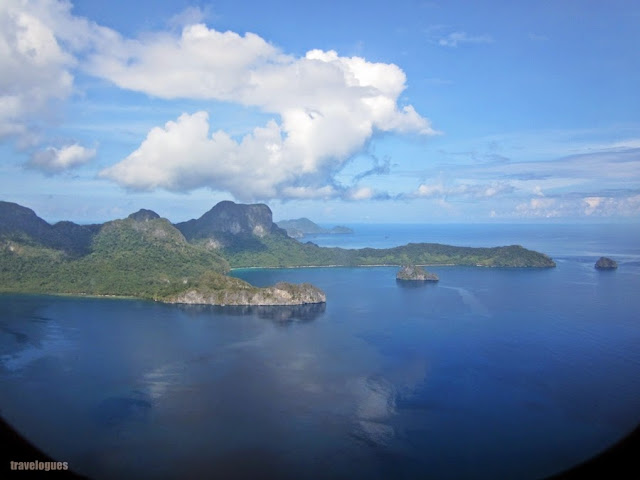 And as the islands got smaller and smaller, I couldn't help but think - the direct flight is definitely worth every penny. The scenic views are priceless. Indeed, El Nido is heaven on earth!